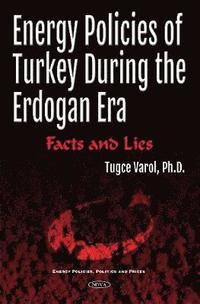 Energy Policies of Turkey During the Erdogan Era

av Tugce Varol
Inbunden Engelska, 2017-05-01
2229
Köp
Spara som favorit
Erdogan discovered in 2002 that energy policies and the energy sector would create a mechanism to institute his dynasty in Turkey. The energy policies of the Erdogan era include how the Erdogan family engaged in the international energy business in Turkey and neighboring countries, and how they became wealthy. After many years of supporting the Calik Holding, the former CEO, Berat Albayrak, Erdogans son-in-law, was appointed Turkeys Minister of Energy by Erdogan in 2015. Since Erdogan came to power in 2002, many books and articles were published on Turkeys foreign policy and domestic politics by scholars. However, this is the first book that combines Erdogans energy policy actions (country by country in chronological order) as well as describing the underlying corruption allegations, the Zarrab case, and the smuggling of ISIS oil. As a result of the research through official Turkey institutions and international institutions, it is shown that an overseas Turkish energy company was and continues to be involved in the energy blocks of Iraqi Kurdistan, thanks to Erdogans agreement with the Barzani administration. This book aims to analyse Turkeys energy relations with Russia, Azerbaijan, Iran, Iraq-Iraqi Kurdistan, Eastern Mediterranean and Central Asian countries since 2002. One of the notable outcomes of the book is to reveal how Erdogan contributed to Israels energy security despite his anti-Israeli rhetoric. The reader will learn the details of the energy projects between Turkey and other countries. In addition, the reader will also learn the roles of Turkeys energy companies close to the Erdogan family. The book emphasises the deterioration of Turkey-Russia relations and its impact on Turkeys energy security, thanks to the Erdogan-Putin rivalry over Syria. Erdogan has been in power since 2002 (President since 2014), and is trying to convert Turkeys political regime to remain in power for as long as possible. Appointing his son-in-law as Turkeys Minister of Energy is not a coincidence, but rather a business strategy.
Visa hela texten

Tugce Varol, Ph.D. completed her BA degree in Political Science and International Relations in Yeditepe University Faculty of Economics and Administrative Sciences in 2001. She continued in International Relations discipline and also get a Master's Degree with Thesis in International Relations from Kadir Has University 2005. She interested in the energy politics and energy geopolitics and started her post-graduate studies at Yeditepe University. She received her Ph.D. degree in 2012 with the thesis of Analysis of Russian Foreign Energy Policy in 2012. She lectured as an Assistant Professor in Istanbul Aydin University between 2012 and 2013 and Uskudar University between 2014 and 2015. She also conducted Post-Doctoral research in Moscow State University Faculty of Global Studies as a scholarship receiver for the term of 2013-2014 from TUBITAK. She has been living in San Diego, California since July, 2015 and has been continuing her research projects.