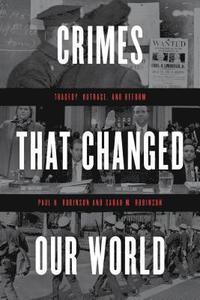 Crimes That Changed Our World

av Paul H Robinson, Sarah M Robinson
Inbunden Engelska, 2018-06-08
269
Köp
Spara som favorit
Specialorder (osäker tillgång). Skickas inom 11-20 vardagar.
Fri frakt inom Sverige för privatpersoner.
Finns även som
Visa alla 2 format & utgåvor
Can crime make our world safer? Crimes are the worst of humanity's wrongs but, oddly, they sometimes "trigger" improvement in our lives. Crimes That Changed Our World explores some of the most important trigger cases of the past century, revealing much about how change comes to our modern world. The exact nature of the crime-outrage-reform dynamic can take many forms, and Paul and Sarah Robinson explore those differences in the cases they present. Each case is in some ways unique but there are repeating patterns that can offer important insights about what produces change and how in the future we might best manage it. Sometimes reform comes as a society wrestles with a new and intolerable problem. Sometimes it comes because an old problem from which we have long suffered suddenly has an apparent solution provided by technology or some other social or economic advance. Or, sometimes the engine of reform kicks into gear simply because we decide as a society that we are no longer willing to tolerate a long-standing problem and are now willing to do something about it. As the amazing and often touching stories that the Robinsons present make clear, the path of progress is not just a long series of course corrections; sometimes it is a quick turn or an unexpected lurch. In a flash we can suddenly feel different about present circumstances, seeing a need for change and can often, just as suddenly, do something about it. Every trigger crime that appears in Crimes That Changed Our World highlights a societal problem that America has chosen to deal with, each in a unique way. But what these extraordinary, and sometime unexpected, cases have in common is that all of them describe crimes that changed our world.
Visa hela texten

Law scholar Paul and writer and researcher Sarah Robinson examine a series of major crimes of different forms from the early twentieth century to the present which sparked outrage and brought about social reforms.... These useful case studies form an excellent survey of government reforms, going beyond the sensationalized events and even beyond the initial resulting reforms to raise questions about how change occurs in America. The text's structure brings order to the chaotic unfolding of human events, even as the Robinsons consider how crimes often defy generalization. Readers interested in American history, law, political science, social movements, and psychology will find this book useful, as will aficionados of the true-crime genre. Crimes That Changed Our World is an ambitious cataloging of the many ways crime has shaped America. * Booklist * Robinson and Robinson relate captivating tales about how outrageous and highly-publicized crimes produced legal reform and social change, usually for the better. Both specialists and novices will be fascinated by the role crime has played in improving our world. -- Douglas N. Husak, Distinguished Professor of Philosophy and Law, Rutgers University; author, The Philosophy of Criminal Law Even today, when the genre has achieved unprecedented popularity, true crime is too often dismissed as mere sensationalism. What the Robinsons demonstrate, so powerfully in this thoroughly impressive book, is that we can learn as much about our nation's history from exploring its most significant crimes as we can from studying its politics, economy, art, or any other aspect of society. -- Harold Schechter, author, The Serial Killer Files By tracing the connections between so many significant legal reforms and the outrage over the crimes that provoked them, Paul and Sarah Robinson offer many important insights for those pursuing law reform at every level. -- Gerald F. Uelmen, professor of law and dean Emeritus, Santa Clara University School of Law; Board of Directors, Catholic Mobilizing Network What do the Triangle Factory Fire, Lindbergh kidnapping, Watts riots, attempted assassination of Ronald Reagan, and the Enron scandal all have in common? The answer, according to this fascinating book, is that the public outrage provoked in each case (as well as fifteen other cases discussed) led to a radical, and often sudden, legal reform - including, respectively, the promulgation of building safety codes, federalization of criminal law enforcement, militarization of the police, changes in the insanity defense, and tougher enforcement of financial crime laws. In twenty absorbing chapters, authors Robinson and Robinson offer a broad sweep of history, legal and social analysis, and human drama. -- Stuart Green, Distinguished Professor of Law, Rutgers University A fascinating analysis of a remarkable range of criminal cases that, for better or worse, triggered significant changes in American law and policy - ranging from building safety regulations to the "war in terror", from drink-driving laws to financial crimes. The cases are described in vivid, often moving, detail, and their social and political significance, through the public outrage that they provoked, is illuminatingly explained. -- Antony Duff, professor emeritus, University of Stirling Immensely readable and informative, Crimes That Changed Our World provides readers with an in-depth look at some of the most fascinating, tragic, and ultimately consequential crimes in the history of modern American criminal justice. From their effects on everything from building safety codes to the insanity defense to our modern system of 911, the authors show how a handful of salient and terrible crimes helped to transform the landscape of American criminal law in profound ways that are still felt-and often hotly debated-today. -- Richard A. Bierschbach, dean and professor of law, Wayne State University Law School In their fascinating look at some of th

Paul H. Robinson, JD, is a Colin S. Diver Professor of Law at the University of Pennsylvania Law School. Robinson is one of the world's leading criminal law scholars, a prolific writer and lecturer, and has published articles in virtually all of the top law reviews. A former federal prosecutor and counsel for the U.S. Senate Subcommittee on Criminal Laws and Procedures, he was the lone dissenter when the U.S. Sentencing Commission promulgated the current federal sentencing guidelines. He is the author or editor of 14 books, including Intuitions of Justice and the Utility of Desert (2013), Distributive Principles of Criminal Law (2008), and Law Without Justice: Why Criminal Law Doesn't Give People What They Deserve (2005). Sarah Robinson works as a writer and researcher and has co-authored three books. She obtained a Masters in Counseling while serving as a sergeant in the U.S. Army. History, people, and the evolution of thought are her main points of interest. The Robinsons have five children.