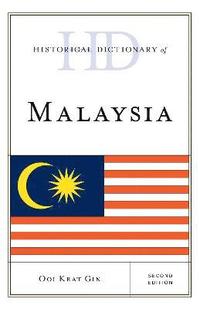 av Ooi Keat Gin
Inbunden Engelska, 2017-12-18
1769
Köp
Spara som favorit
Skickas inom 10-15 vardagar.
Fri frakt inom Sverige för privatpersoner.
Finns även som
Visa alla 2 format & utgåvor
Malaysia is one of the most intriguing countries in Asia in many respects. It consists of several distinct areas, not only geographically but ethnically as well; along with Malays and related groups, the country has a very large Indian and Chinese population. The spoken languages obviously vary at home, although Bahasa Malaysia is the official language and nearly everyone speaks English. There is also a mixture of religions, with Islam predominating among the Malays and others, Hinduism and Sikhism among the Indians, mainly Daoism and Confucianism among the Chinese, but also some Christians as well as older indigenous beliefs in certain places. This second edition of Historical Dictionary of Malaysia contains a chronology, an introduction, appendixes, and an extensive bibliography. The dictionary section has over 500 cross-referenced entries on important personalities, politics, economy, foreign relations, religion, and culture. This book is an excellent resource for students, researchers, and anyone wanting to know more about Malaysia.
Visa hela texten

This second edition, by a well-known scholar and professor, addresses politics, the economy, and sociocultural topics in Malaysia, a democratic country that celebrated its 60th year of independence from Great Britain in 2017. The book begins with acronyms and abbreviations followed by maps and a chronology (fifty pages). The informative introduction covers the land and people, climate and vegetation, sociocultural fabric, economy, and history of this diverse nation. This second edition contains more than five hundred entries. For this second edition, the author gave the book a complete overhaul: some entries were deleted, some were combined under an umbrella topic, some were revised, all were evaluated, and some were completely rewritten. In sum, this title provides users with up-to-date information. Guide words, see, and see also references facilitate navigation, and the content is enhanced by black-and-white photographs. Three appendixes follow on the kings of Malaysia since 1957, prime ministers since 1955, and statistical data (area, population, ethnic groups, etc.). The book is intended for the interested individual as well as students and scholars. The book's users will especially appreciate the extensive bibliography with more than one hundred pages of citations covering many broad topics, such as history, politics, economy, culture, and the environment, science, and technology. Highly recommended for public and academic libraries. * American Reference Books Annual *

Ooi Keat Gin is an award-winning author and editor of historical works on Southeast Asia. Currently a professor of history and coordinator of the Asia Pacific Research Unit (APRU-USM), School of Humanities, Universiti Sains Malaysia, Dr Ooi is an elected Fellow of the Royal Historical Society (London).