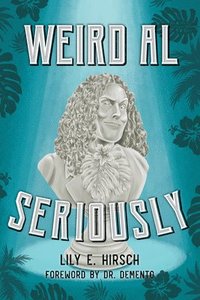 av Lily E Hirsch
Inbunden Engelska, 2020-05-15
339
Köp
Spara som favorit
Skickas inom 10-15 vardagar.
Fri frakt inom Sverige för privatpersoner.
Finns även som
Visa alla 1 format & utgåvor
This book is the first to address in a serious way the impact and meaning of the music of "Weird Al" Yankovic. Though everyone knows his name, Yankovic is often dismissed as a novelty. His music builds on a rich American tradition of parody song, with many levels of signification-humorous, insulting, political, often at the same time. His songs, including his original compositions, make us laugh but also have a point of view, be it on society, popular culture, food, or words themselves. Very few other artists have created music so dense in meaning and for so long, and it's high time we recognize Yankovic's cloyingly humorous appeal. Through original interviews with the man himself, Lily Hirsch addresses Yankovic's relationship to past parody song as well as his unique approach to the art form. Focusing mainly on his fourteen studio albums, the book explores his music based on themes like insult, politics, race, and word abuse. It also discusses his reputation as one of the music industry's good guys. In today's age of incivility (political and otherwise), his nice-guy persona stands out and has helped win him fiercely loyal fans who've found in his music a certain acceptance and affirmation. This book is for those fans but also invites music enthusiasts of all stripes to consider and reconsider Yankovic's music.
Visa hela texten

Hirsch insists that it is high time that we look at, listen to and talk "about the various aspects of Yankovic's art that merit serious attention," to move the reader to revisit Yankovic's music and listen with fresh ears . . . Hirsch [makes] a good case for Yankovic's artistic bona fides while still keeping things hopping.--The Washington Post Music writer Hirsch celebrates the career of music comedian Alfred "Weird Al" Yankovic in this thoroughly researched debut biography. Best known for his parodies, Hirsch argues that Yankovic is much more than a comedy act, and that his songs allow listeners to "be whoever you are" . . .this is the perfect volume for all who proudly rock out to Weird Al.--Publishers Weekly There's something dangerous about serious analysis of comedy, but musicologist Hirsch's look into the discography of pop parodist 'Weird Al' Yankovic keeps things fun. After a brief look at his influences (including Dr. Demento, who wrote the introduction), she mines literary and social criticisms and, backed up by an exhaustive survey of Yankovic in the media, dissects his work to prove that he is more than just a novelty act. . . . Hirsch is clearly a fan, and her geeking out over Yankovic's terrible (wonderful) puns and keen (and keenly juvenile) sense of the absurd will endear the book to readers who are fellow Al-colohics.--Booklist [Hirsch] combines a close reading of Yankovic's work with thorough research, explaining that his success is rooted in both his clever turn of phrase and his willingness to take on complex themes. The author searches for deeper meanings, asking probing questions: What is Yankovic saying about race, religion, and gender? What is really going on in "Angry White Boy Polka"? While this scholarly treatment may sound too serious for such entertaining fare, Hirsch keeps the tone energetic . . . and livens the text with funny anecdotes and interviews with Yankovic and his band members. VERDICT This engaging read skillfully documents the hard work that goes into being silly; readers will emerge with a newfound respect for Yankovic.--Library Journal Too easy is Weird Al dismissed as unimportant, but artists who take art and twist it into something fresh and new deserve their own accolades! In Weird Al: Seriously we can truly appreciate the message behind the mask and the man behind the clown.--Fran Drescher, actress, comedian Weird Al is as smart as he is zany, and his parodies are clearly born of a deep love of music, which is the secret ingredient of successful satire. In her fine new book, Lily Hirsch offers an engaging exploration of Weird Al's place in the cultural landscape.--Peter Schickele, a.k.a. P.D.Q. Bach Weird Al: Seriously is a bracingly smart, incisive book about a wonderfully, transcendently silly icon who also happens to be a super-genius. It's an eminently worthy addition to the growing body of literature on Al that gives Al his due as an artist and national treasure. As someone who has spent a LOT of time over-thinking every element of Al's career I am in genuine awe at just how much thought and care Hirsch has put into her work.--Nathan Rabin, film and music critic, and author, Weird Al: The Book So happy to see Weird Al getting the recognition he deserves. He's one of my favorite spirits, entities, performers, and I hear he's an incredible family man. Also that hair, gotta love that hair.--Reggie Watts

Lily E. Hirsch earned her Ph.D. in musicology from Duke University. Her past books include A Jewish Orchestra in Nazi Germany: Musical Politics and the Berlin Jewish Culture League (University of Michigan Press in 2010), Music in American Crime Prevention and Punishment (University of Michigan Press in 2012), Anneliese Landau's Life in Music: Nazi Germany to Emigre California (Eastman Studies in Music in 2019), and, as co-editor, Dislocated Memories: Jews, Music, and Postwar German Culture (Oxford University Press in 2014), winner of the American Musicological Society's Ruth A. Solie Award.