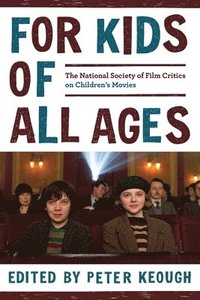 For Kids of All Ages

The National Society of Film Critics on Children's Movies

av Peter Keough
Häftad Engelska, 2019-11-15
219
Köp
Spara som favorit
Skickas inom 10-15 vardagar.
Fri frakt inom Sverige för privatpersoner.
Finns även som
Visa alla 1 format & utgåvor
In For Kids of All Ages, members of the National Society of Film Critics celebrate the wonder of childhood in cinema. In this volume, original essays commissioned especially for this collection stand alongside classic reviews from prominent film critics like Jay Carr and Roger Ebert. Each of the seven sections in this collection takes on a particular aspect of children's cinema, from animated features to adaptations of beloved novels. The films discussed here range from the early 1890s to the present. The contributors draw on personal connections that make their insights more trenchant and compelling. The essays and reviews in For Kids of All Ages are not just a list of recommendations-though plenty are included-but an illuminating, often personal study of children's movies, children in movies, and the childish wonder that is the essence of film.
Visa hela texten

Contrary to what Hollywood would have us believe, there is a whole world of movies (for all ages) outside the confines of animated blockbusters (for the whole family). This thoughtful, entertaining collection introduces parents and children to all kinds of movies, from all over the world, from Meet Me in St. Louis and Germany Year Zero to The Rider and Paddington 2. -- A. S. Hamrah, Film Critic, n+1, author of The Earth Dies Streaming: Film Writing, 2002-2018 As a film critic for French Review at the Cannes Film Festival between 1978 and 1981, I, like Peter Keough and all the other critics in this scintillating collection of essays, worshipped at the altar of cinema. Their earliest encounters on the silver screen paved the way for these writers to look at movies about children in a more critical manner as adults. Their connections with their youthful viewing triggers our own memories as we relive our own dreams and sometimes our nightmares conjured up on screen. From the first souvenirs of a Lumiere Brothers ground-breaking home movie to the literally uplifting narrative of an animated UP these film essays speak to the eternal child within us. -- John Michalczyk, film professor and historian, and documentary filmmaker

Peter Keough writes frequently on film as a correspondent for the Boston Globe. He was the film editor for the Boston Phoenix from 1989 until the publication's demise in 2013. His writing has also appeared in the Chicago Reader, the Chicago Sun-Times, the Chicago Tribune, Chicago Magazine, Sight & Sound, Boston Magazine and numerous others. Keough has been a member of the National Society of Film Critics since 1992 and his writing has appeared in several of their anthologies. He is the editor of Flesh and Blood: the National Society of Film Critics on Sex Violence and Censorship (1995) and Kathryn Bigelow Interviews (2013). Keough lives in Boston, MA

Introduction 1. From Child to Critic From Toddler to Auteurist: A Film Critic, the Early Years by Gerald Peary Children of the Hydra: The 7th Voyage of Sinbad (1958) and Special Effects Master Ray Harryhausen by James Verniere How Seeing Airport (1970) as a Kid Grounded My Critical Sensibility by Charles Taylor Revisiting Old Yeller (1957) and Yellow Submarine (1968) by Peter Keough Light in Auggie: In Wonder (2017), a Deformed Child Isn't the Only Flawed Character by J. R. Jones The Many Kinds of Movie Wonder by Jonathan Rosenbaum Infant Cinema in Querelle enfantine/A Childish Quarrel (1896) by Robert Horton 2. Adventures in Animation The Ageless Wonder of Bambi (1942) by Michael Wilmington Raising the Art of Animation to a Higher Level in Up (2009) by Peter Keough Of Eternity and Beyond: Toy Story 3 (2010) by John Anderson Spinning Gold from Plastic in The Lego Movie (2014) by Andy Klein The Spirit of the West Is Alive and Well in Rango (2011) by Michael Wilmington Weirdness for Both Kids and Adults: The Triplets of Belleville (2003) by Gerald Peary Bear Meets Mouse in Ernest & Celestine (2012) by Michael Sragow Underground Comedy in The Boxtrolls (2014) by John Anderson Ideals Crash to Earth in The Wind Rises (2013) by Michael Sragow The Red Turtle (2016) Is a Myth in the Making by Peter Rainer 3. Beast Fables Into the Wild: Four Variations on The Jungle Book by Michael Sragow An Ape Shall Show the Way: Dawn of the Planet of the Apes (2014) by Michael Sragow Long Live the King: King Kong (1933) by Jay Carr No Reining in White Mane (1953) by David Sterritt In Babe (1995), a Pig Shows the Way by Carrie Rickey Accidental Tourist: Babe: Pig in the City (1998) by Stephanie Zacharek 4. Dreams, Fantasies, and Nightmares There's No Film Like Oz: The Wizard of Oz (1939) by Michael Wilmington The Animated Enchantment of Song of the Sea (2014) by Justin Chang A Dream of Evil in The Night of the Hunter (1955) by Robert Horton Careful What You Wish For: The Red Shoes (1948) by Sheila Benson Between the Fantastic and the Mundane: The Curse of the Cat People (1944) and Poltergeist (1982) by David Sterritt Fauny Girl: Innocence Finds a Way through Pan's Labyrinth (2006) by Peter Keough Beauty and the Beast Within: Four Versions of Beauty and the Beast by Peter Keough 5. Well Adapted (or Maladjusted) The Three Ages of Little Women: 1933, 1949, and 1994 by Carrie Rickey A Consummate Christmas Carol (1951) by Michael Wilmington Dancers Bring to Life Tales of Beatrix Potter (1971) by Sheila Benson Enchantingly Blunt: A Little Princess (1995) by John Anderson Martin Scorsese Pays Tribute to Cinema and Childhood in Hugo (2011) by Emanuel Levy Smart Times at Beverly Hills High in Clueless (1995) by Kenneth Turan Henry James's Dark Screwball Comedy: What Maisie Knew (2012) by Gerald Peary From Neverland to Shadowlands: Hollywood's Romance with Children's Book Authors by Peter Keough Mary Poppins Returns, and She's Closer to the Feisty Original by J. R. Jones 6. Matters of Life and Death Children of War: Germany Year Zero (1948) and Forbidden Games (1952) by Morris Dickstein A Search for Hope in the Ruins: The Search (1948) by Emanuel Levy Innocent Bystanders: Five Films about Kids Growing Up in an Unforgiving World by Jay Carr Politics Makes for Poor Parenting in A World Apart (1988) by Peter Rainer Iran's Child-Centered Films by Godfrey Cheshire 7. Ordinary Heroes Punk Heroines in We Are the Best! (2013) by Sheila Benson Dancing "By Myself " in The Band Wagon (1953) by Stephanie Zacharek Growing Up Female in Lady Bird (2017), The Fits (2015), and Leave No Trace (2018) by Robert Horton Perverse Conversion in The Miseducation of Cameron Post (2018) by Robert Horton Boys Will Be Girls in Ma Vie en Rose (1997) by Nathan Lee Flower Power: The Blossoming of Maximo Oliveros (2005) by Godfrey Cheshire Uneasy Rider by Peter Keough 8. Extraordinary Heroes Terror Tacti