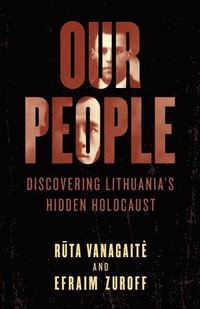 av Ruta Vanagaite, Efraim Zuroff
Inbunden Engelska, 2020-05-15
263
Köp
Spara som favorit
Finns även som
Visa alla 1 format & utgåvor
This remarkable book traces the quest for the truth about the Holocaust in Lithuania by two ostensible enemies: Ruta a descendant of the perpetrators, Efraim a descendant of the victims. Ruta Vanagaite, a best-selling Lithuanian writer, was motivated by her recent discoveries that some of her relatives had played a role in the mass murder of Jews and that Lithuanian officials had tried to hide the complicity of local collaborators. Efraim Zuroff, a noted Israeli Nazi-hunter, had both professional and personal motivations. He had worked for years to bring Lithuanian war criminals to justice and to compel local authorities to tell the truth about the Holocaust in their country. The fact that his maternal grandparents were born in Lithuania and that he was named for a great-uncle who was murdered with his family in Vilnius with the active help of Lithuanians made his search personal as well. Journey with an Enemy exposes the significant role played by local political leaders and the prewar Lithuanian administration that remained in place during the Nazi occupation in implementing the Nazis' Final Solution. It also tackles the sensitive issue of the motivation of thousands of ordinary Lithuanians in the murder of their Jewish neighbors. At the heart of the book, these are the issues that Ruta and Efraim discuss, debate, and analyze as they crisscross the country to visit dozens of Holocaust mass murder sites in Lithuania and neighboring Belarus. During the journey, they searched for neglected graves, interviewed eyewitnesses, and looked for traces of the rich Jewish life that had existed in hundreds of Jewish communities throughout Lithuania. This compelling book recounts their harrowing journey.
Visa hela texten

This is a painful and important book-painful because so much of it consists of excruciating eyewitness accounts to the torment inflicted on Lithuanian Jews by their fellow citizens, and important because so little has appeared in English on not only this terrible dimension of the Holocaust, but also the reluctance, even refusal, of the descendants of the killers to acknowledge their role in the murders all these years later. The account of the Lithuanian government's vacillations in dealing with the nation's past is particularly eye-opening. -- Peter Hayes, author of Why? Explaining the Holocaust Our People is an immensely valuable addition to our knowledge about the genocidal murder of Lithuanian Jews. The authors' remarkable investigation has brought to light the active role played by Lithuanian citizens, often with minimal oversight by Nazi occupiers, at hundreds of killing sites. It will serve as a powerful wake-up call for grappling with the complicit legacy of World War II. -- Yehuda Bauer, Holocaust Historian, Academic Advisor, Yad Vashem

Ruta Vanagaite, one of Lithuania's most popular public personalities and the successful author of numerous bestsellers, became persona non grata in her homeland after this book was originally published in Lithuania. She currently lives in Jerusalem. Efraim Zuroff is the chief Nazi hunter of the Simon Wiesenthal Center and director of the center's Israel Office and East European affairs. Five documentaries have been made about his work, including "The Search for Doctor Death," (BBC 2009). A Holocaust historian, popular lecturer worldwide, and author, he lives in Jerusalem.