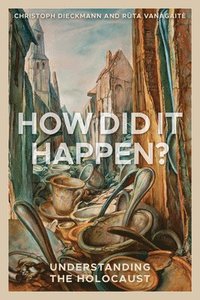 How Did It Happen?

av Christoph Dieckmann, Ruta Vanagaite
Inbunden Engelska, 2021-10-15
515
Köp
Spara som favorit
In this compelling book, Lithuanian author Ruta Vanagaite holds an extended conversation with noted historian Christoph Dieckmann. His exploration of the causes and consequences of the Holocaust in Lithuania provides the first overview for general readers that considers the perspectives of all the central groups involved-Jews, Lithuanians, and Germans. Drawing on a rich array of sources in all the key languages-Yiddish, Ivrit, Lithuanian, and German-Dieckmann considers not only the Berlin-based orientation of the German perpetrators but also the space where the Shoah took place-Lithuanian society with its Jewish minority under German occupation. He contends that this "space" of mass crimes is always linked with warfare and occupation. The Holocaust was unprecedented, but he makes a powerful case it cannot be isolated from the other mass crimes that took place at the same time in the same space against thousands of Soviet prisoners of war and forced refugees from the Soviet territories. Dieckmann shows that the Holocaust could not have unfolded throughout German-dominated Europe without the conditional cooperation of non-Germans in each occupied country. Existing antisemitism was radicalized from the 1930s onward, turning Jews, under the enormous stress of unrelenting warfare and often instable conditions of occupation, into what were perceived as deadly enemies. The Holocaust, its history and memory, can only be understood through this broader context. The authors' searching exchanges illuminate the most profound questions we have as we struggle to understand the Holocaust.
Visa hela texten

Christoph Dieckmann is one of the foremost historians of the Holocaust. His extraordinary study of the German occupation of Lithuania is the most important book written about the Holocaust in the twenty-first century. This dialogue opens the door to his vast knowledge and to his measured and persuasive interpretations. -- Timothy Snyder, Yale University; author of On Tyranny: Twenty Lessons from the Twentieth Century What is this book about? It is about the main lesson of the Holocaust: about the fact that each one of us has a choice-to be human or not to be. Even in the hell we have this choice. Evil always needs executioners-big and small, more small than big. It is so simple to become a small executioner. Often only you would know about the betrayal you have committed, but this is even worse. Other people can forget about it, but you yourself will never be able to forget. The time will go by, you will be alone-on your way, in the night, before dying , and for sure you will remember it. -- Svetlana Alexievich, winner of the 2015 Nobel prize in literature This book is a breakthrough. Authored by Christoph Dieckmann, a great authority on the history of Lithuania during World War Two, and a Lithuanian writer, Ruta Vanagaite, it tells the story of the annihilation of Lithuanian Jewry, in which there was massive participation by ethnic Lithuanians, under overall German command. Based on the vast store of Dr. Dieckmann's archive-based and multilingual knowledge, the book unfolds in a dialogue that intelligent readers everywhere can easily absorb. Viewing the Lithuanian Jewish tragedy from an overall historical perspective that emphasizes local motivations and co-responsibility for genocide, the authors' conversation makes academic historical knowledge accessible to the general public. -- Yehuda Bauer, honorary chairman of IHRA, academic adviser to Yad Vashem This book, even though it is written in the form of a journalistic dialogue, is a serious work. Christoph Dieckmann, a highly respected European historian, bases his assessments on indisputable sources, avoiding dilettantism or bias. He therefore successfully analyzes forms of extreme ethnic nationalism-the appearance of Lithuanian Nazism of 1941-1944, remnants of which still exist today. Like Ruta Vanagaite's and Efraim Zuroff's Our People, this book will anger Nazi apologists but undoubtedly will deepen our national self-awareness and understanding of history. -- Tomas Venclova, poet, essayist

Christoph Dieckmann is a German historian who has taught and conducted research at Keele University and the Fritz Bauer Institute. He currently directs a sound-history study, Sounds of Anti-Jewish Persecution, at the University of Bern. His book Deutsche Besatzungspolitik in Litauen 1941-1944 (German Occupation Policy in Lithuania 1941-1944) was awarded the Yad Vashem International Book Prize for Holocaust Research. Ruta Vanagaite, a best-selling Lithuanian writer and journalist, became persona non grata in her homeland after her previous book, Our People: Discovering Lithuania's Hidden Holocaust, was first published in Lithuania. She now lives in Jerusalem.

Prologue
Ruta Vanagaite
1 Why This Book?
2 People Had a Choice
3 Germany's Trauma
4 Lithuania's Trauma
5 The Jew Is the Devil
6 Small and Radical
7 Plans for Mass Murder
8 "Blitzkrieg": Local Helpers Needed!
9 Lithuania's Dream of Independence
10 An Easy Occupation
11 Controversies of the Uprising
12 Enter the SS
13 Jews in Panic
14 Lithuanian Border Strip: The First Shootings
15 Pogroms
16 The First Mass Shooting of Jews in Kaunas
17 The Road to Ponar
18 Vigilante Lithuanian Courts
19 Ghettoization in the Provinces
20 Robbing the Living
21 Lithuanian Fascists Take Over
22 "Kill Them All!"
23 The "Final Solution" in the Provinces
24 The Oral Orders
25 The Lithuanian Road Killers
26 100,000 Trapped City Jews
27 Life in the Ghettos: Hunger, Poetry, Death
28 Choiceless Choices
29 The Accidental Death of European Jews
30 Forgotten Victims: Soviet POWs
31 Forgotten Victims: The Soviet Evacuees
31 Slavery
33 No to the SS Legion
34 To Die as Free Fighters
35 Survival and Terror
36 The End: Vilnius
37 The End: iauliai
38 The End: Kaunas
39 The Murdered "Others"
40 Burning the Bodies
41 To Save a Jew
42 The Silence of the Church
43 The Brief Story of Lithuanian Resistance
Epilogue
Selected Bibliography
About the Authors