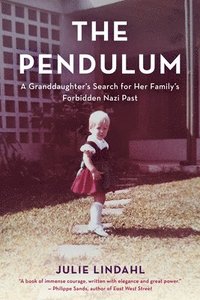 A Granddaughter's Search for Her Family's Forbidden Nazi Past

av Julie Lindahl
Häftad Engelska, 2022-02-15
239
Köp
Spara som favorit
Finns även som
Visa alla 1 format & utgåvor
This gripping memoir traces Brazilian-born American Julie Lindahl's journey to uncover her grandparents' roles in the Third Reich as she is driven to understand how and why they became members of Hitler's elite, the SS. Out of the unbearable heart of the story-the unclaimed guilt that devours a family through the generations-emerges an unflinching will to learn the truth. In a remarkable six-year journey through Germany, Poland, Paraguay, and Brazil, Julie uncovers, among many other discoveries, that her grandfather had been a fanatic member of the SS since 1934. During World War II, he was responsible for enslavement and torture and was complicit in the murder of the local population on the large estates he oversaw in occupied Poland. He eventually fled to South America to evade a new wave of war-crimes trials. The pendulum used by Julie's grandmother to divine good from bad and true from false becomes a symbol for the elusiveness of truth and morality, but also for the false securities we cling to when we become unmoored. As Julie delves deeper into the abyss of her family's secret, discovering history anew, one precarious step at a time, the compassion of strangers is a growing force that transforms her world and the way that she sees her family-and herself.
Visa hela texten

In this powerful and solemn memoir, Lindahl (Rose in the Sand), who was born in Brazil to a German family, recounts seeking the truth about her grandparents' Nazi past, which her family hid from her. In prose that is formal, yet poetic and heartfelt ("While truth can be elusive, often staring at us from outside the rain-spattered window of our own perception, the failure to believe that it exists... is the seed of self-destruction"), Lindahl shares what she learned during seven years of research and travel. Many readers will be moved and find meaning in Lindahl's journey to come to terms with her family's past and process the guilt of inherited sins * Publishers Weekly, Starred Review * In a work a lifetime in the making, [Lindahl] writes of her awakening to the pieces missing in her history and the drive that led her to ask difficult questions about her grandparents and their roles in the Nazi SS . . . From discovering unknown family in South America to accepting that wounds were necessary to open in order to heal, Lindahl shows how generations can suffer silence and shame throughout the years, and the importance of coming to terms with the truth in order to find closure. This powerful work reveals how people adversely impacted by the past persevere, even while living alongside the perpetrators who still carry prejudice. * Library Journal * A sustained rumination on the morbid past and how vitally essential it is to confront this honestly. . . [Lindahl] has set an example we must hope her students and our society will follow." * The Historian * A book of immense courage, written with elegance and great power. -- Philippe Sands, author of East West Street, Professor at University College London An extraordinary meditation on evil and complicity, and on the role future generations play when trying to uncover a perfidious past. With a brilliant prose that often reads as poetry, Julie Lindahl explores and discovers her family's Nazi past. A narrative that is deeply moving as well as informative in its history. -- Marjorie Agosin, Wellesley College; author of I Lived in Butterfly Hill Julie Lindahl has a kind of courage that is rarely found. Her truthfulness is a rigorous and raw inquiry into history through her own ancestry. She avoids the quick gloss and embraces the hard work of holding her family's intergenerational traumas up to the light. What shines through is difficult, but loving. The story is horrible and yet filled with possibility. While her writing is beautiful and effortless, the subject she carries is anything but. I deeply respect her willingness to face the cultural complexity that lives in her own skin. -- Nora Bateson, author of Small Arcs of Larger Circles; award-winning filmmaker of "An Ecology of Mind" I opened The Pendulum and immediately found myself drawn into it. As a historian, I often wondered how we could profit from the determined pursuit of haunted family stories by descendants of individual perpetrators. Here's the breathtaking answer. -- Jochen Boehler, Friedrich-Schiller University, Jena In the literature of the Holocaust, the story of the perpetrator is rarely told from 'the inside.' Julie Lindahl has taken on this painstaking task when she tells us the story of her family. It is written from the heart but has outstanding literary qualities-a rare but phenomenal combination. The result is a very important book that is difficult to put down before you reach the end. -- Stefan Einhorn, Karolinska Institute; author of The Art of Being Kind Outstanding insights into the aftermath of World War II and the Holocaust-based on the perspective of both perpetrators and their descendants. The book is indispensable for anyone who wants to see the extent and complexity of the lasting influence of war, not only in its own time but also for future generations. -- Eskil Franck, Uppsala University; Former Director, The Living History Forum A powerful book about good and evil that has becom

Julie Lindahl is an author and educator living in Sweden. She is a contributor to WBUR Cognoscenti and has been featured on National Public Radio. Julie holds a BA from Wellesley College, an MPhil in international relations from Oxford University, and was a Fulbright Scholar in Frankfurt. She is the founder of Stories for Society, a nonprofit organization for renewing the art of story-making among youth for social transformation. WBUR 90.9 won the 2018 Edward R. Murrow Award for excellence in innovation and the 2018 Associated Press Media Editor's Award for innovation in storytelling based on a program series featuring her story.