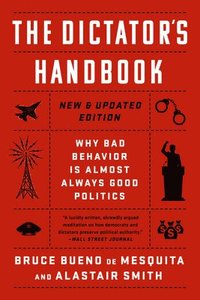 av Alastair Smith, Bruce De Mesquita
Häftad Engelska, 2022-04-26
182
Köp
Spara som favorit
Bruce Bueno de Mesquita and Alastair Smith's canonical book on political science turned conventional wisdom on its head. They started from a single assertion: leaders do whatever keeps them in power. They don't care about the "national interest"-or even their subjects-unless they must. Newly updated to reflect the global rise of authoritarianism, this clever and accessible book illustrates how leaders amass and retain power. As Bueno de Mesquita and Smith show, democracy is essentially just a convenient fiction. Governments do not differ in kind, but only in the number of essential supporters or backs that need scratching. The size of this group determines almost everything about politics: what leaders can get away with, and the quality of life or misery under them. And it is also the key to returning power to the people.
Visa hela texten

Bruce Bueno de Mesquita is the Julius Silver Professor of Politics and director of the Alexander Hamilton Center for Political Economy at New York University. He is the author of sixteen books, including The Predictioneer's Game. Alastair Smith is professor of politics at New York University. The recipient of three grants from the National Science Foundation and author of three books, he was chosen as the 2005 Karl Deutsch Award winner, given biennially to the best international relations scholar under the age of forty. They are also the authors of The Spoils of War: Greed, Power, and the Conflicts That Made Our Greatest Presidents.