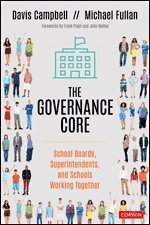 The authors believe that most trustees (board members) want to make a difference in the lives of students, and to improve the district and the system and as a whole. Their vision is of a governance system, school board and superintendent; working together as a cohesive, unified team with a common vision driven by a shared moral imperative. This is a dynamic, powerful role for school boards.

?Education cannot be expected to solve all of our social ills, but it is increasingly clear that it is the one social institution that has the potential to make a major difference for humanity in a troubled world.

While it has often been shown that districts and boards don?t have close working relationships, this book takes a different view. We go to the core, basic foundation of understanding local efficacy: the mindset of high performing trustees and superintendents carrying out the critical function of governance.  We believe that school boards are vastly underutilized at precisely the time when they are most needed. We hold another fundamental premise which we will position in the course of this book: the vast majority of school board members want to improve the public education system.

Finally, decisions are made within a political context. Our main goal in this book is to spell out what good governance consists of at the local district level so that well-intended politics can combine with the governance core to produce education results never before seen.
Visa hela texten

The Governance Core is a masterpiece that calls on governing board members to seize the moral high ground, establish a unity of purpose, and pursue governing excellence. The book is insightful, engaging, and filled with real-world examples that illuminate important principles needed for effective governing. The Governance Core is a must-read for new or veteran school board members.

Brilliant and utterly compelling! I have sat in boardrooms for 46 years governing education institutions, hospitals, and universities. It’s as if Davis Campbell and Michael Fullan were looking over my shoulder! The Governance Core captures the essence of effective governance in complex times. This book challenges us to focus on and achieve a higher moral purpose. Campbell and Fullan move beyond what governance is and explore how great leaders should govern.

Governance, school boards, and superintendents are on the front line of meeting the challenges facing education in the 21st century. The Governance Core by Davis Campbell and Michael Fullan captures not only the nature of the challenges but also the characteristics of highly successful school board trustees and superintendents working together. The Governance Core goes deeply into the heart of effective governance. Incorporate these ideas, and you will become much more effective as governance leaders—and your students, parents and educators will benefit immensely.

A treasure of a book, chock-full of guidance from the strategic to the pragmatic. I will refer to The Governance Core regularly as our board and principal work together in the service of the scholars and families in our school community. Whether you’re a district leader or a principal, on a district school board, charter board, or local school council, you will find insights and tools to deepen your understanding and improve your practice of effective governance. Our nation’s children deserve no less.

Davis Campbell and Michael Fullan do a masterful job of explaining how public school boards and superintendents working well together, with a shared moral imperative, can be a driving force for improvement in student learning as well as for society as a whole. This exquisite new book,

The Governance Core, beautifully explains why this is true and how to achieve it.

Davis Campbell is the former Executive Director of the California School Boards Association and is Chair of the University of California, Davis, School of Education, Board of Advisors and a Senior Fellow. He also serves as a Trustee on the Stuart Foundation Board of Trustees.

Campbell has a deep and broad background in public education. He served for 12 years in the California Department of Education, serving six of those years as Deputy State Superintendent of Public Instruction in charge of all education programs. In 1988, he was appointed Executive Director of the California School Boards Association, serving in that capacity until his retirement in 2001. He also served as an elected trustee on the Yolo County Board of Education.

Michael Fullan, OC, is the former Dean of the Ontario Institute for Studies in Education and Professor Emeritus of the University of Toronto. He is co-leader of the New Pedagogies for Deep Learning global initiative. Recognized as a worldwide authority on educational reform, he advises policymakers and local leaders in helping to achieve the moral purpose of all children learning. Michael Fullan received the Order of Canada in December 2012. He holds honorary doctorates from several universities around the world.