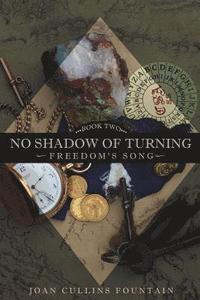 No Shadow of Turning

av Joan Cullins Fountain
Häftad Engelska, 2018-10-15
229
Köp
Spara som favorit
Deputy Johnny McLane and Marshal Sam Brett find their troubles mounting. Although the small territorial town of Sideling, Wyoming, is rich in natural resources and has seen a slight increase in population, the two major businesses seem to be struggling. The ambush of Sideling-bound provision wagons, the incidence of mysterious arsons, and the reality of outlaw gang raids keep the townsfolk restless and the lawmen on edge.

Furtively engaged by a madman in a nefarious contest of cat and mouse, the deputy suddenly finds 7-year-old Tad, the orphan he has taken under his wing, and the troubled school marm, Myra Davis, inexplicably drawn into the trap. When Johnny begins to court young Cassie Wilkerson, under the scrutiny of her cattleman father, he finds tribulation mounting. In the adversity surrounding them and with their faith and mutual trust severely tested, Cassie and Johnny must decide whether or not they will continue to forge the bond of affection between them.

As difficulties close in on all fronts, Johnny wrestles to find inner strength. He must purpose to follow his own attributes and opinions or draw his arguments from a higher source. Under wise counsel, he perceives that the decisions he makes and the weapons of warfare he chooses could determine the fate of the settlement and impact the entire territory.

Trade magazine
In the troubled decade of 1870's Territorial Wyoming, Deputy Marshal Johnny McLane finds that many difficulties in the small settlement of Sideling defy solution. He strives to find balance in his professional and personal life as he courts the young woman he loves. As adversities increase, he begins to realize the weapons of warfare he chooses could determine the fate of the settlement and the territory.
Visa hela texten