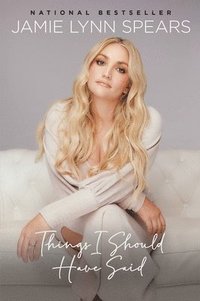 Things I Should Have Said

av Jamie Lynn Spears
(2 röster)
Inbunden Engelska, 2022-02-10
223
Köp
Spara som favorit
Finns även som
Visa alla 2 format & utgåvor
Now a National Bestseller! You've read the headlines, but you don't know Jamie Lynn Spears. The world first met Jamie Lynn as a child star, when it was her job to perform, both on set and for the press. She spent years escaping into different characters on All That and Zoey 101. But as she grew up, faced a teen pregnancy, raised her daughter on her own, pursued a career, and learned to stand on her own two feet, the real Jamie Lynn started to take center stage- a raw, blemished, and imperfect woman, standing in her own power. Despite growing up in one of America's most tabloid-famous families, Jamie Lynn has never told her story in her own words. In Things I Should Have Said, she talks frankly about the highs and lows, sharing what it was like traveling the world as a kid, how she moved into acting and performing herself, what life as a child star took from her, and the life-changing reality of becoming a teen mom. She talks about how she finally found love and how the mistakes she has made have taught her more than anything else. She also shares vulnerably about how the ATV accident that nearly took her daughter's life brought her back to her faith and caused her to reevaluate and redirect her life. Frank, courageous, and inspiring, Things I Should Have Said is a portrait of a wife, momma, sister, daughter, actress, and musician doing the best she could to show up for herself and teach her daughters to have the courage to love every part of themselves, too.
Visa hela texten

Jamie Lynn Spears is an actress and musician who began her entertainment career at an early age. The Louisiana native made her way into acting with some national commercials before landing her first big debut on television, appearing on Nickelodeon's All That and then starring as the title character on Zoey 101, for which she won the Nickelodeon Kids' Choice Award for Best Actress in 2006. When she became a mother at sixteen, her pregnancy made headlines. She returned to the entertainment business as a singer/songwriter who has collaborated with artists such as Jana Kramer and has won several awards (NSAI, BMI) as a songwriter for writing the platinum-selling song "I Got the Boy." She released the new version of the Zoey 101 theme song "Follow Me" with Chantel Jefferies ahead of the upcoming highly anticipated Zoey 101 reboot. She will also be back to play the beloved character Noreen for season 2 on Netflix's Sweet Magnolias in 2022.