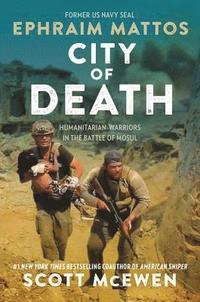 Humanitarian Warriors in the Battle of Mosul

av Ephraim Mattos, Scott Mcewen
Inbunden Engelska, 2018-10-23
389
Köp
Spara som favorit
Specialorder (osäker tillgång). Skickas inom 11-20 vardagar.
Fri frakt inom Sverige för privatpersoner.
Finns även som
Visa alla 1 format & utgåvor
After leaving the US Navy SEAL Teams in Spring of 2017, Ephraim Mattos, age 24, flew to Iraq to join a small group of volunteer humanitarians known as the Free Burma Rangers, who were working on the frontlines of the war on ISIS. Until being shot by ISIS on a suicidal rescue mission, Mattos witnessed unexplainable acts of courage and sacrifice by the Free Burma Rangers who, while under heavy machine gun and mortar fire, assaulted across ISIS minefields, used themselves as human shields, and sprinted down ISIS infested streets-all to retrieve wounded civilians. In City of Death: Humanitarian Warriors In the Battle of Mosul, Mattos recounts in vivid detail what he saw and felt while he and the other Free Burma Rangers evacuated the wounded, conducted rescue missions, and at times fought shoulder-to-shoulder with the Iraqi Army against ISIS. Filled with raw and emotional detail of what it's like to come face-to-face with death, this is the harrowing and uplifting true story of a small group of men who laid down their lives to save the lives of the Iraqi people and who chose to live or die by the words, "Greater love hath no man than this, that a man lay down his life for his friends." As the co-Author of the #1 New York Times bestselling American Sniper, Scott McEwen has teamed up with Mattos to help create an unforgettable true story of an American warrior turned humanitarian forced to fight his way into and out of a Hell on Earth created by ISIS
Visa hela texten

"In combat it's not about the number of lives you take, it's about the number of lives you save. Ephraim did not only fight the toughest terrorists in the world during the Battle of Mosul, but he also saved numerous innocent Iraqi lives. He is the true definition of an American freedom fighter."--Hamody Jasim, Sgt. Major Iraqi Army (Ret.) and author of The Terrorist Whisperer "Ephraim Mattos has demonstrated a rare level of public virtue and commitment to humanity. CITY OF DEATH is a sobering reminder of the challenges we face on this earth, but stories like Ephraim's inspire us to press on. Books detailing the lives of Special Forces heroes are not uncommon these days. However, Ephraim's unique story of combat and sacrifice AFTER leaving the military will leave a lasting impression on the reader."--Tim Ballard, Founder & CEO of Operation Underground Railroad "Ephraim's story is a taut real-life thriller. His vivid and brilliantly reported account of events on the front-lines gives the reader a real dose of reality. He has a unique way of storytelling that makes this book a page-turner."--Rudolph Atallah, Lt Colonel (Ret), Former Africa Counter-terrorism Director, Office of the Secretary of Defense

EPHRAIM MATTOS is a 25 year-old volunteer medic and former Navy Seal from Wisconsin. He left the military after completing his commitment, and dove headfirst into the unfamiliar world of Humanitarian Aide, whose mission would be to provide medical and humanitarian relief on the front lines to fleeing civilians in areas that other organizations like Doctors Without Borders and the UN refused to go due to the danger. His mission today is to tell the world about the suffering of the Iraqi people and to provide an example of courage for people to follow by telling the story of the unsung heroes of the Free Burma Rangers.SCOTT MCEWEN lives in San Diego, California, where he began writing while practicing law. He grew up in the mountains of Eastern Oregon where he became an Eagle Scout; hiking, fishing, and hunting at every opportunity presented. He obtained his undergraduate degree in Oregon and thereafter studied and worked extensively in London, England. Scott works with and provides support for several military charitable organizations, including the Seal Team Foundation.