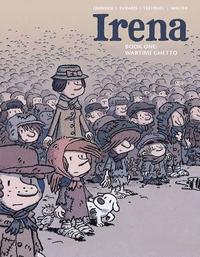 av Jean-David Morvan, Severine Trefouel, David Evrard
Inbunden Engelska, 2020-03-31
209
Köp
Spara som favorit
The true tale of Irena Sendlerowa, a social worker in the Warsaw ghetto in the early 1940s, during the early days of German occupation. She is credited for saving the lives of 2500 Jewish children by gradually and quietly smuggling them to safety in small groups. While she is eventually arrested by Gestapo, imprisoned, and tortured for her actions, she refuses to reveal her network and is condemned to death. She is ultimately saved from death by other members of her organization. After the war, she retrieved the names of all children she saved (kept in a glass jar buried under a tree behind her house) and attempted to locate each of their parents for reunion. And while most of the parents had been gassed in the Holocaust, she made it her mission to help those orphans find new homes. Another true SCHINDLER'S LIST scenario, illustrated for a younger audience, but equally moving for adults.
Visa hela texten

ASSOCIATION OF JEWISH LIBRARIES -- This three-volume graphic novel treatment of the life of the famed Irena Sendler is a remarkable achievement. The first volume was published in French in 2017 and the last two volumes were published in English in 2020. All four authors and artists involved tell an age-appropriate, emotional story of Irena Sendlerowa, the righteous gentile who saved over 2500 Jewish children in wartime Warsaw. Their careful research goes further than most of the present biographies for young people by separating her life experiences into three volumes. Book One: Wartime Ghetto, describes how Irena, a young social worker, began her resistance work in the German-occupied Warsaw Ghetto of the 1940s. The amazing Where's Waldo style of artwork provides numerous ways a reader can immerse themselves in ghetto life quite powerfully by simply staring at the opening two-page spread. The dark color palette recalls the period and sets the right mood. Irena saves children, gets arrested, refuses to reveal her contacts and is ultimately saved from death with bribes to the guards. The artists use the contrivance of an adorable little white dog named Shepsi that at first protects ghetto children and later accompanies Irena and her resistance network. The antics of this feisty little companion allows readers a respite from the many tragic scenes of Nazi cruelty, poverty, and smuggled babies, and will especially appeal to younger readers. The second volume, Book Two: Children of the Ghetto, begins after the war in 1947, focusing on Irena's imprisonment by the Nazis and her desperate search for the mostly-orphaned children, along with her attempts to reunite them with the remnants of their families. The narrative jumps back and forth in time to when Irena visits Yad Vashem and tells her story in 1983 upon receiving honors and acclaim in Israel. The third volume, Book Three: Life After the Ghetto finds Irena still in Poland in her later years, looking back on her life and her accomplishments. The color palette has been brightened, she has a new little dog, and her name is now recognized around the world. The authors repeatedly highlight Irena's regrets that she was not able to do enough and save more children. She died in 2008 at the age of 98. The books should be read in order and although there may be some confusion from the time-jumps, the artistic style and colors are the clues to the time period in Irena's life. This book will appeal to anyone who likes graphic novels, and although it is not a light-hearted read, it is a wonderful testament to a truly righteous person.