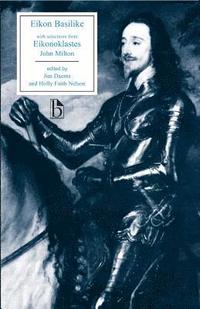 Eikon Basilike With Selections From Eikonoklastes

The Portraiture of His Sacred Majesty in His Solitudes and Sufferings : With Selections from Eikonoklastes, John Milton

av John Milton, Jim Daems, Holly Faith Nelson
Häftad Engelska, 2005-11-01
309
Köp
Spara som favorit
Published just after the execution of King Charles I in 1649, Eikon Basilike is a defence of the king's motivations and actions prior to and during the British civil wars. Nine chapters of Eikonoklastes, John Milton's response to Eikon Basilike, are also included in this edition. Here Milton, writing from a republican perspective, attacks the substance and style of the King's Book. These fascinating texts are now available in an edition that also includes a rich selection of historical documents. This Broadview edition's critical introduction discusses the publication history and both seventeenth-century and current debates regarding the work and its authorship, while the appendices provide a generous selection of contemporary responses to Eikon Basilike and accounts of the king's trial and scaffold speech.
Visa hela texten

"This is a very intelligent and authoritative edition of Eikon Basilike, a text crucial for the study of seventeenth-century English literature and politics. The extraordinary textual duel between England's fallen king, Charles I, and her epic poet, John Milton, has come to be seen as one of the great set-pieces of early modern polemical literature, and this edition now allows us to teach this compelling intertextual struggle in one volume. Not only do the editors offer a full and thoughtfully annotated text of the king's book, but they also provide the most relevant sections of Milton's brilliant response, Eikonoklastes-not to mention a rich selection of other contemporary contributions to the debate." - Paul Stevens, University of Toronto "Eikon Basilike is one of the most popular and important texts of the seventeenth century, but has long been out of print. In printing with Eikon Basilike selections from John Milton's response, Eikonoklastes, the editors reunite texts often studied by different disciplines. Notices of, and brief selections from, other attacks on and defences of 'The King's Book' also return these works to the polemical print exchanges to which they belong and which they in turn shaped. As well as a useful working text for scholars in two disciplines, this edition will enable and stimulate discussions of the rhetorical contest for authority that was inseparable from political struggles in the England of the 1640s and 1650s." - Kevin Sharpe, Queen Mary, University of London

Jim Daems currently teaches in the English Department at the University College of the Fraser Valley. He is the author of Seventeenth-Century Literature and Culture (Continuum, 2005). Holly Faith Nelson, Assistant Professor of English at Trinity Western University, has co-edited The Broadview Anthology of Seventeenth-Century Verse and Prose (2000) and Of Paradise and Light: Essays on Henry Vaughan and John Milton (University of Delaware Press, 2004).