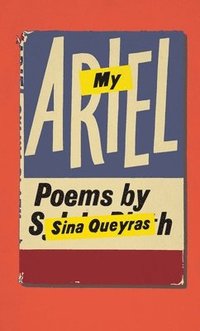 av Sina Queyras
Häftad Engelska, 2017-10-26
163
Köp
Spara som favorit
Kan tyvärr inte levereras innan julafton.
Finns även som
Visa alla 2 format & utgåvor
"Cut" was featured in Poetry Magazine She is the author most recently of the poetry collection MxT (Coach House, 2014) which received the QWF Award for poetry, the Pat Lowther Award, and the ReLit award for poetry. Her 2009 collection Expressway was nominated for a Governor General's Award, and 2006's Lemon Hound won a Lambda Award and the Pat Lowther Award. My Ariel is a response to Sylvia Plath's Ariel, one of the 20th century's most iconic texts. Queyras identifies as an LGBTQ writer and her work may be of interest to bookstores with an LGBTQ focus. Sina has lived and worked in several cities across North America, and is well-connected to their individual literary scenes: New York City, Calgary, Montreal, Vancouver, Seattle, Toronto, Philadelphia. Sina is strongly connected to the North American poetry community, particularly through her popular blog, lemonhound.blogspot.com, which will be returning from hiatus this season.
Visa hela texten

"Few poets are better equipped than Queyras to plunge into the examination of the figure of Plath as a prototype for female genius. With honesty, humour and passionate attention, she lays bare the gendered conventions that circumscribed Plath's life and how they are still, in new guises, determining her own life as well as that of her female students... Queyras's masterful collection does not stay in the shadow of Plath's work. Its mix of scholarship, dramatic monologue, persona-adopting and elegy could give rise to a multipronged new genre: the auto-poetic-bio-epic." - The Globe and Mail "The collection is so rich and so heroic, I cannot do it justice in so short a word count. Readers will need to spend a lot of time with it. Rest assured that the time will be very well spent." - Montreal Review of Books

Sina Queyras was born in Manitoba and grew up on the road in western Canada. She has since lived in Vancouver, Toronto, Montreal, New York, Philadelphia, and Calgary where she was Markin-Flanagan Writer in Residence. She is the author most recently of the poetry collection MxT (Coach House 2014) which received the QWF Award for poetry, the Pat Lowther Award, and the ReLit award for poetry. Expressway (Coach House 2009) was nominated for a Governor General's Award and a selection from that book won Gold in the National Magazine Awards. Lemon Hound (Coach House 2006) won a Lambda Award and the Pat Lowther Award. She is also the author of the novel Autobiography of Childhood (Coach House 2011) a finalist for the Amazon First Novel award, and Unleashed (BookThug 2010), a selection of posts from the first four years of her blog, Lemon Hound. In 2005, she edited Open Field: 30 Contemporary Canadian Poets, for Persea Books. She has taught creative writing at Rutgers, Haverford, and Concordia University in Montreal, where she currently resides.