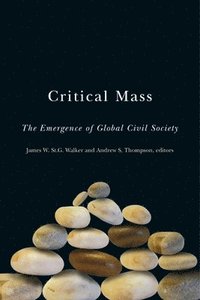 The Emergence of Global Civil Society

"If the ideals of worldwide justice and equity are ever to be realized, if our planet and its people are ever to be rescued from shortsightedness and greed, it will only be through the workings of a vibrant international civil society. This groundbreaking book neither exaggerates the promise of such society nor underestimates its problems. Instead, by combining the insights of academics and activists and drawing upon both theory and cases, it illuminates a field of study only beginning to be mined. Both those of us who toil in civil society organizations and those who are affected by them have reason to be grateful." -- William F. Schulz, Senior Fellow, Center for American Progress, and former Executive Director, Amnesty International USA -- 200801

James W. St.G. Walker is a professor of history at the University of Waterloo, where he specializes in the history of human rights and race relations. His books include The Black Loyalists and a Racea, Rights and the Law in the Supreme Court of Canada (WLU Press, 1998), and he has published numerous articles and book chapters analyzing campaigns for human rights reform. Andrew S. Thompson is a Special Fellow with the Centre for International Governance Innovation (CIGI) in Waterloo, Canada. His areas of specialization include human rights and international governance. He has written a number of book chapters and is co-editor of Haiti: Hope for a Fragile State (WLU Press, 2006).

Table of Contents for Critical Mass: The Emergence of Global Civil Society , edited by James W. St.G. Walker and Andrew S. Thompson List of Acronyms Preface | John English Acknowledgments Introduction | James W. St.G. Walker and Andrew S. Thompson Overview and Theory The Globalization of Civil Society | John D. Clark Approaching Global Civil Society | Paul van Seters Case Studies The Conference of NGOs (CONGO): The Story of Strengthening Civil Society Engagement with the United Nations | Renate Bloem, Isolda Agazzi Ben Attia, and Philippe Dam Amplifying Voices from the Global South: Globalizing Civil Society | Rajesh Tandon and Mohini Kak Facilitating NGO Participation: An Assessment of the Government-Sponsored Mechanism for the Copenhagen Summit for Social Development and the Beijing Conference on Women | Elizabeth Riddell-Dixon The Arab NGO Network for Development: A Case Study on Interaction between Emerging Regional Networking and Global Civil Society | Ziad Abdel Samad and Kinda Mohamadieh A Case of NGO Participation: International Criminal Court Negotiations | Gina E. Hill Influencing the IMF | Jo Marie Griesgraber Civil Society, Corporate Social Responsibility, and Conflict Prevention | Virginia Haufler The FIM G8 Project, 2002-2006: A Case Analysis of a Project to Initiate Civil Society Engagement with the G8 | Nigel T. Martin Problems and Prospects Laying the Groundwork: Considerations for a Charter for a Proposed Global Civil Society Forum | Andrew S. Thompson Looking to the Future: A Global Civil Society Forum? | Jan Aart Scholte Democratizing Global Governance: Achieving Goals while Aspiring to Free and Equal Communication | Martin Albrow and Fiona Holland Notes on the Contributors Index Contributors Isolda Agazzi Ben Attia is Senior Program Officer for the Conference of NGOs (CONGO). Isolda holds a masters degree in international relations from the Graduate Institute of International Studies (IUHEI) of Geneva. She has worked for more than ten years in the field of development co-operation, for bi- and multilateral donor agencies, an academic research institute, and NGOs, in Switzerland and on the field, covering socio-economic development and good governance issues. She joined CONGO in 2002, and since 2004 she has also been a lecturer in international law at the University of Calabria (Italy). Martin Albrow is a sociologist whose books include Max Weberas Construction of Social Theory, Do Organizations Have Feelings, Sociology: The Basics , and the prize-winning The Global Age . Formerly he was founding editor of the journal International Sociology , president of the British Sociological Association, and chair of the Sociology Panel for the British universitiesa Research Assessment Exercise. Emeritus professor of the University of Wales, he is currently a Visiting Fellow in the Centre for the Study of Global Governance in London and an editor in chief of Global Civil Society , 2006/7. Renate Bloem completed her studies in medicine, languages, and literature at the Universities of Bonn, Munich, and Columbia University and started her academic career by teaching at international schools and cultural institutions worldwide. Elected president of the Conference of NGOs in Consultative Relationship with the United Nations (CONGO) in November 2000 and re-elected in December 2003,she has been involved in numerous UN meetings, led CONGO delegations to the World Conference against Racism, to the World Summit on Sustainable Development. Through the CONGO Working Group on Asia she has organized the Asian Civil Society Forum 2002 and 2004 in Bangkok, Thailand, and, together with Latin American NGO networks, the NGO Seminar in Santiago, Chile. Most recently, together with Board member FEMNET, she organized the African Civil Society Forum in Addis Ababa. Together with the CONGO Team she has been at the forefront of guiding, supporting, and coordinating civil society in the processes of the World Summit of the Information Society