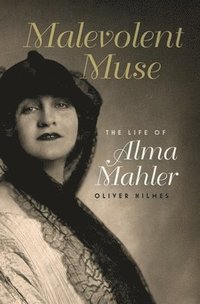 The Life of Alma Mahler

av Oliver Hilmes
Inbunden Engelska, 2015-06-04
499
Köp
Spara som favorit
Of all the colorful figures on the twentieth-century European cultural scene, hardly anyone has provoked more polarity than Alma Schindler Mahler Gropius Werfel (1879 - 1964), mistress to a long succession of brilliant men and wife of three of the best known: composer Gustav Mahler, architect Walter Gropius and writer Franz Werfel. To her admirers Alma was a self-sacrificing socialite who inspired many great artists. Her detractors found her a self-aggrandizing social climber and an alcoholic, bigoted, vengeful harlot - as one contemporary put it, "a cross between a grande dame and a cesspool." So who was she really? When historian Oliver Hilmes discovered a treasure-trove of unpublished material, much of it in Alma's own words, he used it as the basis for his first biography, setting the record straight while evoking the atmosphere of intellectual life in Europe and then inemigre communities on both coasts of the United States after the Nazi takeover of their home territories. First published in German in 2004, the book was hailed as a rare combination of meticulously researched scholarship and entertaining writing, making it a runaway bestseller and advancing Oliver Hilmes to his position as a household name in contemporary literature. Alma Mahler was one of the twentieth century's rare originals, worthy of her immortalization in song. Oliver Hilmes has provided us with an even-handed yet tantalizingly detailed account of her life, bringing Alma's singular story to a whole new audience.
Visa hela texten

Oliver Hilmes's Malevolent Muse: The Life of Alma Mahler is a stylishly dispiriting biography of the woman who had early ambitions to become a composer but who won fame for a remarkable series of marriages and affairs-to and with, variously, Gustav Mahler, Oskar Kokoschka, Walter Gropius, and Franz Werfel. Hilmes, who earlier wrote a fine life of Cosima Wagner, emphasizes the extent of Mahler-Werfel's anti-Semitism, which remained disturbingly strong even during the Second World War: in exile in Los Angeles, she told Werfel that the Nazis had done "a great many praiseworthy things."" * New Yorker *

OLIVER HILMES has written a number of best-selling biographies. His second work appeared in English as Cosima Wagner: The Lady of Bayreuth.