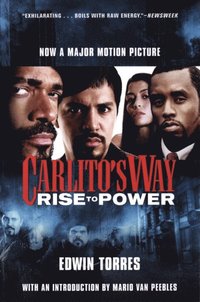 av Edwin Torres, Mario Van Peebles
E-bok (EPUB - DRM), Engelska, 2007-12-01
109
Ladda ned
Spara som favorit
Laddas ned direkt
Läs i vår app för iPhone, iPad och Android
The unforgettable noveland the basis for the feature filmabout Carlito Brigante, a Harlem drug dealer in the 1960s, and his rise to the top. Carlito Brigante is just another Spanish Harlem street punk with a poor boy's dream of flash and fast money. But as he gets older he determines that it's either take or be taken, and he knows which role he intends to play. Soon he's a mob-connected professional with an easy charm, joie de vivre, stubborn pride, and hair-trigger temper. But the rules change rapidly in a sudden-death world of scams, sell-outs, and payback, where only the strongest and smartest predator can be king of the barrio. And when there's a major changing of the guard in the top echelons of the mob, Carlito will have some hard choices to make. Taut, thrilling, and a joy to read, Carlito's Way established a voice that has lost none of its vivid color or power to enthrall. ';Exhilarating... Boils with raw energy.' Newsweek
Visa hela texten