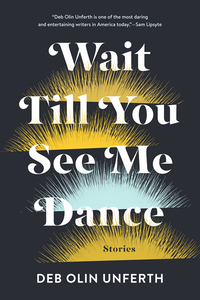 Wait Till You See Me Dance E-bok

av Deb Olin Unferth
E-bok (EPUB - DRM), Engelska, 2017-03-21
145
Ladda ned
Spara som favorit
Laddas ned direkt
Läs i vår app för iPhone och iPad
&quoteDeb Olin Unferth's stories are so smart, fast, full of heart, and distinctive in voice-each an intense little thought-system going out earnestly in search of strange new truths. What an important and exciting talent.&quote-George SaundersFor more than ten years, Deb Olin Unferth has been publishing startlingly askew, wickedly comic, cutting-edge fiction in magazines such as Granta, Harper's Magazine, McSweeney's, NOON, and The Paris Review. Her stories are revered by some of the best American writers of our day, but until now there has been no stand-alone collection of her short fiction.Wait Till You See Me Dance consists of several extraordinary longer stories as well as a selection of intoxicating very short stories. In the chilling &quoteThe First Full Thought of Her Life,&quote a shooter gets in position while a young girl climbs a sand dune. In &quoteVoltaire Night,&quote students compete to tell a story about the worst thing that ever happened to them. In &quoteStay Where You Are,&quote two oblivious travelers in Central America are kidnapped by a gunman they assume to be an insurgent-but the gunman has his own problems.An Unferth story lures you in with a voice that seems amiable and lighthearted, but it swerves in sudden and surprising ways that reveal, in terrifying clarity, the rage, despair, and profound mournfulness that have taken up residence at the heart of the American dream. These stories often take place in an exaggerated or heightened reality, a quality that is reminiscent of the work of Donald Barthelme, Lorrie Moore, and George Saunders, but in Unferth's unforgettable collection she carves out territory that is entirely her own.
Visa hela texten