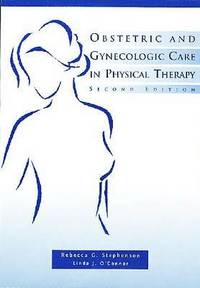 This second edition has been thoroughly updated to cover changes in the field of physical therapy as it pertains to the treatment of women. It is a suitable resource for all practitioners involved in women's health care. Chapters have been streamlined, reorganized, as well as expanded, and include research that reflects the evolution of this specialty practice. Tables and illustrations have been added for quick reference. There are also new chapters on special pregnancies, including high risk and maternal disabilties, and on the aging female's needs. The resources and references are revised and expanded. Combined with the first edition's easy reading style, the book offers the clinician, student and educator a ready resource to initiate, establish and expand the practice of physical therapy in the care of women.
Visa hela texten

"""I found this book to progress in a logical fashion. I believe that I will make reference to this text on many occasions." Kellie Plant, MSPT, "Journal of the Section on Women s Health""