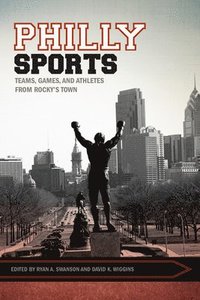 av Ryan K Anderson, David K Wiggins
Häftad Engelska, 2016-04-30
329
Köp
Spara som favorit
Skickas inom 10-15 vardagar.
Fri frakt inom Sverige för privatpersoner.
Philadelphia sports-anchored by the Eagles, Flyers, Phillies, and 76ers- have a long, and sometimes tortured, history. Philly fans have booed more than their share and have earned a reputation as some of the most hostile in the country. They've been known, so the tales go, to jeer Santa Claus and cheer at the injury of an opposing player. Strangely though, much of America's perception of Philadelphia sports has been shaped by a fictional figure: Rocky. The series of Hollywood films named after their title character has told and retold the Cinderella story of an underdog boxer rising up against long odds. One could plausibly make the argument that Rocky is Philadelphia's most famous athlete. Beyond the major sports franchises and Rocky, lesser-known ath- letic competition in Philadelphia offers much to the interested observer. The city's boxing culture, influence on Negro Leagues baseball, role in establishing interscholastic sport, and leadership in the rise of cricket all deserve and receive close investigation in this new collection. Philly Sports combines primary research and personal experiences-playing in the Palestra, scouting out the tombstones of the city's best athletes, enjoying the fervor of a Philadelphia night with a local team in pursuit of a championship title. The essence of Philadelphia sport, and to a cer- tain extent the city itself, is distilled here.
Visa hela texten

"Swanson and Wiggins have assembled a collection of ambitious scope and compelling topics that will interest scholars and laypersons alike." --Journal of Sport History, Fall 2017 "As noted, Philly Sports successfully complicates the city's 'underdog ethos.' ... Philly's greatest underdog is not a Philly underdog because, as the contributions to this collection illustrate, the city's underdog identity is a continually constructed interpretation of the sporting reality as experienced by (primarily white) men. The fact that many of the chapters concern the late 1960s and early 1970s, a historical moment when masculinity was being redefined due to African American's struggle for equality and the rise of second wave feminism, further attests to the constructed, historically-specific nature of the city's underdog definition. Overtime, this definition may shift, opening a space for Washington and other influential sportswomen such as Dawn Staley and Mo'ne Davis. But for now, Philly Sports remains men's sports (and, for the sake of Sixers' fans, let's hope Ben Simmons can join this legacy)." --Sport in American History, August 2016 "This book offers an engaging variety of topics for Philly fans, and non-Philly fans, that span sports in the city from colonial times to the current day. It covers the topics of race, gender, social class, and ethnicity in a fashion helpful to scholars and yet accessible to the general public, allowing readers to gain an intimate knowledge of the city and its residents. It is a welcome addition to the annals of urban history." --Gerald R. Gems, past president, North American Society for Sport History

Ryan Swanson is an assistant professor and director of the Lobo Scholars Program at the University of New Mexico. He has written widely on sport in America and is the author of When Baseball Went White: Reconstruction, Reconciliation, and Dreams of a National Pastime. David K. Wiggins is a professor and codirector of the Center for the Study of Sport and Leisure in Society at George Mason University. He is the editor, coeditor, or author of many books, including, most recently, DC Sports: The Nation's Capital at Play.