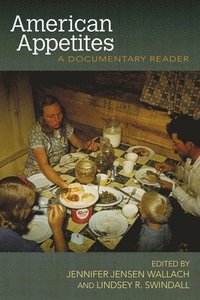 av Jennifer Jensen Wallach, Lindsey R Swindall
Häftad Engelska, 2014-10-30
309
Köp
Spara som favorit
Skickas inom 10-15 vardagar.
Fri frakt inom Sverige för privatpersoner.
Finns även som
Visa alla 1 format & utgåvor
Designed to appeal to students of history and foodies alike, American Appetites, the first book in the University of Arkansas Press's new Food and Foodways series, brings together compelling firsthand testimony describing the nation's collective eating habits throughout time. Beginning with Native American folktales that document foundational food habits and ending with contemporary discussions about how to obtain adequate, healthful, and ethical food, this volume reveals that the quest for food has always been about more than physical nourishment, demonstrating changing attitudes about issues ranging from patriotism and gender to technology and race. Readers will experience vicariously hunger and satiation, culinary pleasure and gustatory distress from perspectives as varied as those of enslaved Africans, nineteenth-century socialites, battle-weary soldiers, impoverished immigrants, and prominent politicians. Regardless of their status or the peculiarities of their historical moment, the Americans whose stories are captured here reveal that U.S. history cannot be understood apart from an examination of what drives and what feeds the American appetite.
Visa hela texten

"This fascinating collection of American food-related documentary sources and images is the first title in the University of Arkansas Press's new Food and Foodways series, edited by the University of North Texas historian Jennifer Jensen Wallach. American Appetites is a logical first choice for the series as it provides a well-curated, foundational collection of essential sources for students and scholars of American food studies. This is a perfect text to use in American food studies surveys and seminars, as well as American history, American studies, and southern studies courses to introduce the expressive power of food in national and regional life. Much more than an ornamental layer of food stories tacked on to American history, the diverse voices chosen for this collection reveal the historical machinations of colonization, power, conquest, global market forces, and the complex negotiations of race, class, gender, ethnicity, and sexuality. Wallach and Linsey R. Swindall's insightful introductory essay positions food studies within American historiography and the mid-twentieth-century new social history and cultural turn that prompted scholars to address the meaning of food in our national narrative." --Journal of American History, January 2016 "This invaluable collection of documents shows the crucial place of food in American history. The editors have dug deep into the larder for these readings, which cross lines of race, ethnicity, class, and gender to show how farmers and cooks helped to build the nation." --Jeffrey M. Pilcher, author of Planet Taco: A Global History of Mexican Food "A seminal resource on America's rich and complex food economy." --Psyche Williams-Forson "A fine collection of documents spanning the American food experience. From Native American explanations of the 'three sisters' crops to Gilded Age menus to the angsts of plenty in the twenty-first century, readers will find a banquet of firsthand accounts detailing the wide-ranging meanings that Americans have given their food over four centuries. Students and food history fans alike will find the essays fascinating and rich." --Rebecca Sharpless, author of Cooking in Other Women's Kitchens: Domestic Workers in the South, 1865-1960 "By giving divergent voices equal weight, Wallach and Swindall invite us to wrestle with the contradictions in food and culture--how we can have so much and yet suffer such hunger; how reconciliation and segregation both find their most powerful metaphors at the table; and how race, ethnicity, gender, religion, and age both obscure and draw forth food choices in our individual and collective lives." --Elizabeth Engelhardt, author of A Mess of Greens: Southern Gender and Southern Food

Jennifer Jensen Wallach is associate professor of history at the University of North Texas, USA and the author or editor of four books, including How America Eats: A Social History of U.S. Food and Culture. Lindsey R. Swindall is visiting assistant professor of history at Sam Houston State University, USA and the author of three books including The Path to the Greater, Freer, Truer World: Southern Civil Rights and Anticolonialism, 1937-1955.