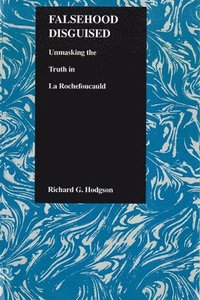 Unmasking the Truth in LA Rochefoucauld

av Hodgson
Häftad Engelska, 1999-10-01
459
Köp
Spara som favorit
Skickas inom 5-8 vardagar.
Fri frakt inom Sverige för privatpersoner.
Falsehood Disguised analyzes La Rochefoucauld's ideas on truth and falsehood in the context of his views on self-love, on the passions, and on vice and virtue. It also explores his views on the subject in relation to what he sees as the extremely fragile foundations of the social contract. It examines these thorny ethical problems first in the context of the Baroque culture that directly influenced his thought and then in the light of the work of other moralists, including Gracian, Daniel Dyke, Descartes, and the Jansenists Blaise Pascal and Pierre Nicole. Through close textual analysis of La Rochefoucauld's writings, Richard Hodgson studies the moralist's use of metaphors such as the mask as well as his very personal concept of what constitutes an etre vrai, or genuine person. The study then traces the impact of La Rochefoucauld's ideas on thinkers from Vauvenargues and Chamfort to Nietzsche, Lautreamont, and Lacan. It concludes by suggesting reasons why La Rochefoucauld's concept of truth continues to have such enormous appeal to the modern reader.
Visa hela texten

Choice December 1995 Humanities \ Language & Literature \ Romance Hodgson, Richard G. Falsehood disguised: unmasking the truth in La Rochefoucauld. Purdue, 1995. 176p bibl index afp (Purdue studies in Romance literatures, 7) ISBN 1-55753-063-7, $29.95. Reviewed in 1995dec CHOICE. Hodgson (Univ. of British Columbia) does not completely "unmask the truth" in La Rochefoucauld's Maximes and Reflexions, but he makes a penetrating foray through the ambiguities and countervailing moral traits for which that author's contemporaries and subsequent readers both reproached and admired him. La Rouchefoucauld sought to analyze and to some extent measure the human propensity for seeking truth and practicing virtue against the inherent obstacles of self-love, pride, self-interest, self-deceit, and indolence. His balance sheet presents an unflattering portrait of humankind's capacity for goodness but a realistic recognition of the complex moral tensions that cohabit the psyche. More single-mindedly than Louis van Delft, Hodgson insists convincingly, albeit redundantly, on the paradoxical marriage of vice and virtue, sincerity and hypocrisy, appearance and reality that define La Rouchefoucauld's vision of morality. The author concludes by analyzing La Rouchefoucauld's influence on 19th- and 20th-century admirers: Lautreamont, Nietzsche, Lacan, and Barthes. Notes and an appendix of English translations complete this perceptive contribution to the understanding of La Rochefoucauld. Upper-division undergraduate and above. -- D. A. Collins, Kalamazoo College

Richard G. Hodgson is a professor of French at the University of British Columbia in Vancouver, Canada.