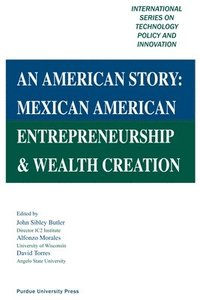 av John Sibley Butler, Alfonso Morales, David L Torres
Inbunden Engelska, 2009-10-15
839
Bevaka
Spara som favorit
Tillfälligt slut – klicka "Bevaka" för att få ett mejl så fort boken går att köpa igen.
In an atmosphere where the Mexican American population is viewed in terms of immigrant labor, this edited book examines the strong tradition of wealth creation and business creation within this population. In the introduction, readers are presented with enterprises such as Latin Works and Real Links, which represent large, successful, and middle size businesses. Chapters span research methods and units of analysis, utilizing archival data, ethnographic data, and the analysis of traditional census data to disaggregate gender and more broadly examine questions of business formation. From the chapters emerges a picture of problems overcome, success, and contemporary difficulties in developing new businesses. Analysis reveals how Mexican American entrepreneurs compare with other ethnic groups as they continue to build their ventures. This work is a refreshing alternative to books that focus on the labor aspects of the Mexican American experience. Contributors reveal the strong history of self-help and entrepreneurship of this population. The book breaks new ground by concentrating on Mexican Americans and disaggregating from the broader demographic categories.
Visa hela texten

This edited volume seeks to provide a counterpoint to the conventional perception of Mexican migration to the United States. It points to the heterogeneity and diversity of the Mexican American economic experience, which extends far beyond low-skill wage work. By bringing data, analysis, and narratives to illustrate its themes of entrepreneurship and wealth creation, the volume makes a welcome if uneven con- tribution to scholarship in immigration and entrepreneurship.The eight chapters that constitute the volume, along with the editors'introduction and conclusion, were originally presented at a conference held at the University of Texas and sponsored by the Kauffman Foundation in 2008.The authors span several disciplines, including management, economics, sociology, history, anthropology, and planning. This multidisciplinary perspective is one ofthe book's strengths. The reader sees the essential complexity of the subject by being required to view it from a variety of angles, qualitative as well as quantitative.In other ways, however, the multiplicity of the authors' approaches in the book creates interpretive challenges. For instance, some chapters do not focus on Mexican Americans but rather on broader groupings such as Hispanics and Latinos. Not all even break Mexican Americans out from these broader groupings to provide a comparative perspective. The time periods of fieldwork in the chapters varies as well, from the early 1990s to the mid-2000s, and there is also a historical chapter on the 1940s. The reader is thus dealing with a moving object as well as a complex one.Half of the chapters rely on large-n samples for their data, typically from the U.S. Census Bureau. One key value of these four chapters is to provide baseline descriptive data on the phenomenon of Mexican American (or Latino/a or Hispanic) entrepreneurship. The chapters display a particular interest in gender issues, which have often been overlooked in the study of minority, ethnic, and immigrant

John Sibley Butler is professor of management and sociology at the University of Texas at Austin. His research areas are organizational science, with special emphasis on military and entrepreneurial organizations. He has published extensively in professional journals. His books include Immigrant and Minority Entrepreneurship: The Continuous Rebirth of American Society (with George Kozmetsky), All That We Can Be: Black Leadership the Army Way (with Charles C. Moskos), and Entrepreneurship and Self-Help Among Black Americans: A Reconsideration of Race and Economics.