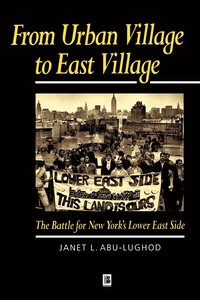 From Urban Village to East Village

The Battle for New York's Lower East Side

av Janet L Abu-Lughod
Häftad Engelska, 1994-11-01
509
Köp
Spara som favorit
Skickas inom 7-10 vardagar.
Fri frakt inom Sverige för privatpersoner.
This landmark study explores a new reality in today's inner cities - one that diverges radically from the dominant models of either the urban village, with its shared culture, or the disorganized zone of urban anomie. Growing numbers of inner city neighbourhoods now contain populations drawn from a multiplicity of ethnicities, subcultures, and classes. These groups may share physical space, but they pursue disparate ways of life and hold very different views of their neighbourhood's future. Such areas have become contested turf - arenas of heated political struggle. Nowhere has this struggle been so complexly joined than in the East Village on New York's Lower East Side. For over two decades, established and new immigrants, community activists, hippies, squatters, yuppies, developers, drug dealers, artists, the homeless, and the police have been battling for control of the district and its central meeting ground, Tompkins Square Park. Based on five years of research and participant observation, this book gives a vivid account of the contestants and their struggles in the battle for the Lower East Side. It is a battle which is likely to be replicated, perhaps less violently, in many other parts of urban America.
Visa hela texten

"[a] fascinating book ... From Urban Village to East Village is a formidable achievement." Progress in Human Geography ./ "As one who has done community studies, my first reaction to Janet Abu-Lughod's ambitious volume about New York's Lower East Side was frankly one of jealousy. I envy her the cadre of able student ethnographers that she was able to field. I envy the colleagues from various disciplines-political scientist Diana Gordon, photographer Marlis Momber, architectural historian Richard Plunz, and geographer Neil Simth-who she draws on to fill in the gaps in the student accounts. I envy her this research site-no doubt among the most politically contested and sociologically complex two square miles of real estate in America. Mostly, I suppose I envy her nerve. Not surprisingly, Abu-lughod was new to New York when she began this project. It is hard to imagine anyone more immersed in the local political culture taking on an area so historically dense. What is surprising is how generally successful the resulting volume is." Philip Kasinitz, AJS Vol 101 No 5 "From Urban Village to East Village: The Battle for New York's Lower East Side works towards bridging this troubling gap in the literature by examining stuggles over urban space on Manhattan's Lower East Side. The result of a collaborative research project directed by Janet Abu-Lughod, the volume situates recent and highly publicized conflicts over housing and public space on the Lower East Side within an interdisciplinary analysis of the neighborhood's changing relationship to the city's political economy... The volume's refreshingly political analysis of contests over urban space, too complex to treat fully here, underscores both the rewards of collaborative research and the importance of grounding our analyses of urban restructuring in particular palces in the multiple arenas of political practice where space is invested with cultural meaning and economic value." Steven Gregory, Urban<!--end-->

Janet L. Abu-Lughod is Professor of Sociology in the Graduate Faculty of the New School for Social Research, New York. She is one of America's leading commentators on urban affairs.

1 Welcome to the Neighbourhood by Janet Abu-Lughod. PART I THE PAST IS STILL THERE 2 The Changing Economy of the Lower East Side by Jan Chien Lin (University of Houston). 3 The Tenement as a Built Form by Richard Plunz (Columbia University) and Janet Abu-Lughod. 4 A History of Tompkins Square Park by Marci Raven (New York History Project) and Jeanne Houck (Eugene Lang College). 5 Deja Vu: Replanning the Lower East Side in the 1930s by Suzanne Wasserman (Iona College). PART II THE PROCESS OF GENTRIFICATION 6 Neighbourhood `Burn-Out': Puerto Ricans at the End of the Queue by Christopher Mele (New School for Social Research, New York). 7 From Disinvestment to Reinvestment: Tax Arrears and Turning Points in the East Village by Neil Smith (Rutgers University) and others. 8 The Process of Gentrification in Alphabet City by Christopher Mele. 9 Public Action: New York City Policy and the Gentrification of the Lower East Side by William Sites (Queens University, New York). PART III CONTESTING COMMUNITY: THE ISSUES AND THE PROTAGONISTS 10 A Resident's View of Conflict on Tompkins Square by Diane Gordon (College of the City of New York). 11 The Battle for Tompkins Square Park by Janet Abu-Lughod. 12 The Residents in Tompkins Square Park by Dorne Greshof and John Dale (New School for Social Research). 13 The Squatters: A Chorus of Voices, But Is Anyone Listening? by Andrew van Kleunen (New School for Social Research). 14 Defending the Cross-Subsidy Plan: The Tortoise Wins Again by Janet Abu-Lughod. 15 Conclusions and Implications by Janet Abu-Lughod.