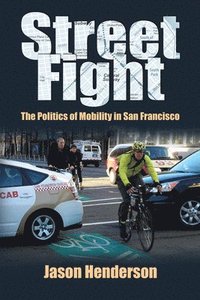 The Politics of Mobility in San Francisco

av Jason Henderson
Häftad Engelska, 2013-05-30
259
Köp
Spara som favorit
Skickas inom 10-15 vardagar.
Fri frakt inom Sverige för privatpersoner.
Finns även som
Visa alla 1 format & utgåvor
Faced with intolerable congestion and noxious pollution, cities around the world are rethinking their reliance on automobiles. In the United States a loosely organised livability movement seeks to reduce car use by reconfiguring urban space into denser, transit-oriented, walkable forms, a development pattern also associated with smart growth and new urbanism. Through a detailed case study of San Francisco, Jason Henderson examines how this is not just a struggle over what type of transportation is best for the city, but a series of ideologically charged political fights over issues of street space, public policy, and social justice. Historically San Francisco has hosted many activist demonstrations over its streets, from the freeway revolts of the 1960s to the first Critical Mass bicycle rides decades later. Today the city's planning and advocacy establishment is changing zoning laws to limit the number of parking spaces, encouraging new car-free housing near transit stations, and applying transit first policies, such as restricted bus lanes. Yet Henderson warns that the city s accomplishments should not be romanticised. Despite significant gains by livability advocates, automobiles continue to dominate the streets, and the city s financially strained bus system is slow and often unreliable. Both optimistic and cautionary, Henderson argues that ideology must be understood as part of the struggle for sustainable cities and that three competing points of view progressive, neoliberal, and conservative have come to dominate the contemporary discourse about urban mobility. Consistent with its iconic role as an incubator of environmental, labour, civil rights, and peace movements, San Francisco offers a compelling example of how the debate over sustainable urban transportation may unfold both in the United States and globally.
Visa hela texten

Henderson does a first-rate job of situating San Francisco within the larger transportation/mobility politics, both historically and contemporarily. . . . He considers the politics of challenging and replacing automobility in a rigorous and well-informed way.--Lisa Benton-Short, coeditor of City & Nature and Migrants in the Metropolis Street Fight addresses a timely and important topic: mobility in contemporary cities. And it offers insight into the complex and convoluted political machinations surrounding urban development questions as well as transportation policy.--Louise Nelson Dyble, author of Paying the Toll: Local Power, Regional Politics, and the Golden Gate Bridge We can dream of cities where we can walk and bike easily and of the role we can play by designing urban greenbelts and parks. But how to make it happen? Henderson, an associate professor of geography at San Francisco State University, provides a detailed case study in Street Fight. . . . 'San Francisco is on the leading edge here in the United States--it's on the cusp of transforming itself and getting away from car dependency, ' Henderson says.--Landscape Architecture Magazine It is fascinating to explore how these three distinct mindsets [progressive, neoliberal, and conservative] have shaped San Francisco in recent decades, and how they interact today to create the city that we'll be moving through in the future.--San Francisco Bay Gazette Henderson, in line with other progressives, argues that improved livability in cities means less automobility--with San Francisco leading these debates and offering lessons for other cities. Recommended.--Choice Street Fight is an excellent contribution to the transportation geography literature. Henderson succeeds in bringing to the fore the role that ideology plays in transportation policy discussions.--Journal of Transport Geography