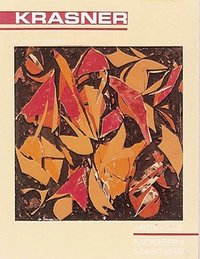 av Robert Carleton Hobbs, Lee Krasner
Häftad Engelska, 1993-09-01
199
Köp
Spara som favorit
Lee Krasner never took the easy way out - not in life, not in art. Brought up in a poor Brooklyn neighborhood and originally named Lena Krasner by her immigrant parents, she decided early on to create a new name and a new identity for herself. Later, as one of the few female painters in the aggressively male circle of Abstract Expressionists, she had to contend not only with the critics' skepticism about their new way of making art but also with the skepticism that greeted any woman's attempts to become a professional artist. Many of Krasner's male colleagues - including her husband, Jackson Pollock - developed a unique "signature" style that identified them throughout their careers. Krasner, however, experimented with one style after another, from her early geometric abstractions (created while she was one of Hans Hofmann's most talented students), through her large-scale organic images of mid-career, to the hard-edge compositions of her late years. Certain elements recur throughout - most notably, her distinctive sense of color, her affinity for swelling forms inspired by nature, and her fearlessness in experimenting with new techniques. Krasner's unwillingness to stick to one style, her readiness to put her career aside to focus on Pollock's, and her feuds with some of the period's most powerful critics all reduced her visibility in the art world. She has been the subject of exhibition catalogs, but this is the first monograph devoted to her work, and it brings to light all the intriguing complexities of her approach to making art. Dr. Robert Hobbs skillfully explores the twists and turns of her career, offering new information and insight about one of the most intriguing painters of the postwar era About the Modern Masters series With informative, enjoyable texts and over 100 illustrations - approximately 48 in full color - this innovative series offers a fresh look at the most creative and influential artists of the postwar era. The authors are highly respected art historians and critics chosen for their ability to think clearly and write well. Each handsomely designed volume presents a thorough survey of the artist's life and work, as well as statements by the artist, an illustrated chapter on technique, a chronology, lists of exhibitions and public collections, an annotated bibliography, and an index. Every art lover, from the casual museumgoer to the serious student, teacher, critic, or curator, will be eager to collect these Modern Masters. And with such a low price, they can afford to collect them all.
Visa hela texten

"At nearly every stage of her 15-year marriage to the universally recognized Jackson Pollock, Lee Krasner was quicker to respond to stylistic innovations in the art world than her husband. Pollock either didn't catch on to the art-world developments that surrounded him or incorporated changes much later than Krasner did. Some critics read Krasner's dynamic painting style as evidence of her superiority as an artist, but others saw her porousness as a problem, and Pollock's comparative insularity as one key to his uniqueness. In Lee Krasner, Robert Hobbs gracefully analyzes the many forces--of personality, education, and cultural and political milieu--that shaped Krasner's 60-year devotion to art; in the process, he elucidates the many reasons her "artistically constructed self remains provisional." B.H. Friedman, Pollock's first biographer, introduces the book with a gripping series of intimate, you-are-there diary entries from the long years of his friendship with the two artists. Then Hobbs weaves biography and critical interpretation to develop the main text of the book. The reproductions of Krasner's drawings and paintings (97 in color) are excellent, giving a fair picture of her long career, and there are more than a score of black-and-white archival photos of Krasner and the other early abstract expressionists. The book has a few odd omissions though, such as any reference to Mark Tobey, whose "white writing" paintings and others are so closely related stylistically to Krasner's work of the 1940s. Still, this is the respectful but objective book Krasner's vigorous work and forceful personality deserve. It sheds sympathetic light on her lifelong, intellectually rigorous, artistic questing." --Peggy Moorman, Amazon "This impressive critical-biographical study confirms Lee Krasner (1908-1984) as one of the major abstract expressionist artists. Though heavily influenced by her husband Jackson Pollock, she challenged and eventually abandoned his style through a series of paintings that Hobbs interprets as a feminist critique of the macho-oriented art of Pollock, Robert Motherwell, Willem de Kooning and their cronies. An art history professor at Virginia Commonwealth University, Hobbs follows Krasner, daughter of Russian Jewish immigrants in Brooklyn, as she transforms herself from well-connected, belligerent young avant-garde painter to supportive, possessive, acquiescent wife and then to an eclectic pioneer who used her art as an intense confrontation with her subconscious. Her swirling biomorphs, jagged collages, radiant lush abstractions, mythic fragments and apocalyptic images of cities are among the works reproduced in 48 color and 67 b & w plates." --Publishers Weekly Praise for the Modern Masters series: "Each author has thoroughly done his or her homework, knows the historical, critical and personal contexts intimately, and writes extraordinarily well." --Artnews

Dr. Robert Hobbs, Rhoda Thalhimer Endowed Professor of American Art History at Virginia Commonwealth University, has taught art history at Florida State, Cornell, and Yale universities, and was director at the University of Iowa Museum of Art. His many publications include Milton Avery, Edward Hopper, and Abstract Expressionism: The Formative Years, and he has curated a number of important exhibitions.