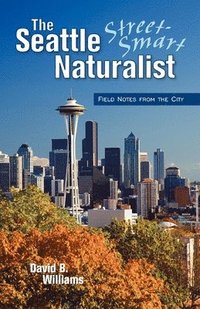 av David B Williams
Häftad Engelska, 2000-09-01
209
Köp
Spara som favorit
Skickas inom 10-15 vardagar.
Fri frakt inom Sverige för privatpersoner.
Naturalist and Seattle native David Williams offers his original perspectives on the wonder and resilience of nature in and around the Northwest's greatest population center. Illustrated by hand-drawn maps, Williams's writings are interesting, intelligent, and challenging at a personal level. He approaches the notion that his beloved city, as hip and urbane as it is, remains a wild place on the Northwest landscape-in the quarried rock of the historical buildings, in the branches of a pocket-sized city park, in the twists and turns of a stream that has been abused by polluters, hedged in by lawns, and buried under expressways. And yet it is a living thing, worthy of rescue. Williams looks beyond the skyline, beyond the postcard views of the Emerald City, and into its wild heart. Praise for The Seattle Street-Smart Naturalist: Like suddenly acquiring X-ray vision . . . Who knew that there was so much fascinating natural history crawling, flying, sprouting, flowing, drizzling, cawing, accreting, and sliding within the city limits of Seattle? Every page, every paragraph of Williams's book brought me revelations-not to mention the sheer pleasure of keeping company with such a sharp and enthusiastic writer. - David Laskin Author of The Children's Blizzard and Braving the Elements A passion for nature and the love of a chosen city combine seamlessly in David Williams's sharp-eyed ramble through Seattle. These beautifully told "field notes" of this inspired urban naturalist bring to life our streets and hills, our downtown edifices and suburban green pockets, on levels infinitely more profound than the everyday. - Ivan Doig Author of This House of Sky Raised in Seattle, David Williams is a general naturalist with a bachelor's degree in geology. As a Park Ranger and educator, he has taught natural history both in the field and in the classroom and has written widely on the topic for the last decade. He has written for Sunset, the Seattle Times, High Country News, National Parks, and Geotimes. Other books include A Naturalist's Guide to Canyon Country and Grand Views of Canyon Country, and he has contributed to Insight Guides: Seattle and Caves, Cliffs, and Canyons.
Visa hela texten