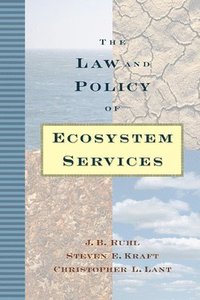 "Anyone interested in ecosystem services--from amateur environmentalist to professional policy-maker--would benefit from reading this book."-- "Natural Areas Journal" "If you are looking for one book to introduce you to the full spectrum of ideas around the concept of ecosystem services, this is it."-- "Ecological Restoration" "As with any new idea, there is confusion over ecosystem services and what conserving or selling them really means. Ruhl, Kraft, and Lant are meticulous in research, comprehensive in scope, and accessible in style. To dig beneath the hype and understand the promise and challenges of conserving ecosystem services, start by reading this book."--James Salzman "Nicholas Institute Professor of Environmental Policy, Duke University" "Ecosystem service values derived directly from nature are well understood but do not show up as measured aspects of our economy ... The authors provide insights as to why ecosystem services fail to be accounted for in land/water use decision-making. They also make the case for why they should be included in our economic models."-- "Wildlife Activist" "In remarkably readable prose, the book is laid out in four main parts accessible to anyone from a scientific, legal, or policy background...It reminds me of the successful interaction of science, law, and policy in the 1970s. We need that to happen again and this book provides the basis for it."--Thomas. E. Lovejoy "Ecology" "One of the most important contributions of economics to environmental protection is the idea that ecosystems can perform economically valuable services even if their monetary value is not captured in markets. This book is the most comprehensive survey of current efforts to measure these services and to overcome the disincentives for land owners to produce them. However, its real contribution is a carefully reasoned suite of legal and policy reforms to increase the production of vital ecosystem services in the future."--Dan Tarlock "Distinguished Professor of Law, Chicago-Kent College of Law" "The work synthesized in this wide-ranging volume marks a dramatic transformation in the way people think about the environment. Ruhl, Kraft, and Lant outline the concrete changes in law and policy needed to go further and turn thinking into action. This book is packed with intellectual excitement and practical promise."--Gretchen C. Daily "Professor, biological sciences; author of New Economy of Nature"

J. B. Ruhl is an expert in environmental law, land use and property law. Before he joined Vanderbilt's law faculty as the David Daniels Allen Distinguished Chair in Law in 2011, he was the Matthews & Hawkins Professor of Property at the Florida State University College of Law, where he had taught since 1999. His influential scholarly articles on environmental law relating to climate change, the Endangered Species Act, ecosystems, federal public lands, and other land use and environmental issues have appeared in California Law Review, Duke Law Review, Georgetown Law Review, Stanford Law Review, Vanderbilt Law Review and the specialty environment journals at several top law schools, among other journals. His works have been selected by peers as among the best law review articles in the field of environmental law eight times from 1989 to 2013. Over the course of his career, he has been a visiting professor at Harvard Law School, George Washington University Law School, the University of Texas Law School, Vermont Law School, and Lewis & Clark College of Law. He began his academic career at the Southern Illinois University School of Law, where he taught from 1994-99 and earned his Ph.D. in geography. Before entering the academy, he was a partner with Fulbright & Jaworski in Austin, Texas, where he also taught on the adjunct faculty of the University of Texas Law School.