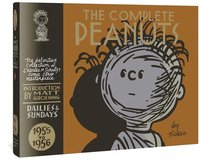 av Matt Groening, Charles M Schulz
Inbunden Engelska, 2005-04-01
299
Köp
Spara som favorit
Skickas inom 7-10 vardagar.
Fri frakt inom Sverige för privatpersoner.
The third volume in our acclaimed series takes us into the mid-1950s as Linus learns to talk, Snoopy begins to explore his eccentricities (including his hilarious first series of impressions), Lucy's unrequited crush on Schroeder takes final shape, and Charlie Brown becomes...well, even more Charlie Brown-ish! Over half of the strips in this volume have never been printed since their original appearance in newspapers a half-century ago! Even the most dedicated Peanuts collector/fan is sure to find many new treasures. The Complete Peanuts will run 25 volumes, collecting two years chronologically at a rate of two a year for twelve years. Each volume is designed by the award-winning cartoonist Seth (It's a Good Life If You Don't Weaken) and features impeccable production values; every single strip from Charles M. Schulz's 50-year American classic is reproduced better than ever before. This volume includes an introduction by Matt Groening (The Simpsons) as well as the popular Complete Peanuts index, a hit with librarians and collectors alike, and an epilogue by series editor Gary Groth.
Visa hela texten