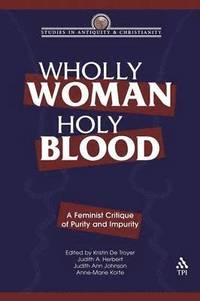 A Feminist Critique of Purity and Impurity

av Kristin De Troyer, Judith A Herbert, Judith Ann Johnson, Anne-Marie Kristin De Troyer Korte
Häftad Engelska, 2003-04-01
569
Köp
Spara som favorit
This is the first book to take a broad interdisciplinary approach to the relationship between female blood and issues of purity and impurity. Well-known women scholars examine blood and purity laws, especially as those laws have been passed down in the biblical literature and in the Roman Catholic tradition. Theses scholars work with different texts, ranging across the biblical, classical, patristic, medieval, and modern, with approaches varying from the historical critical to postmodern. Kristin De Troyer (Claremont) asks whether blood is a threat to holiness or a step toward another holiness. Judith Ann Johnson (Claremont) explores the shedding of blood as the sanctifying rite of heroes. Anne-Marie Korte (The Netherlands) takes an anthropological look at female blood rituals. Kathleen O'Grady (Toronto) analyzes the woman with a discharge of blood in light of menstrual prohibitions in the Hebrew Bible. Deborah Ellens (Claremont) offers a challenging reading of Leviticus 15. Mayer Gruber (Beer Sheva, Israel) examines Qumran law and halachic sources dealing with women and pollution. Kathleen P. Rushton (Brisbane, Australia) offers a feminist reading of the story of the woman in childbirth in John 16:21. Jennifer Schultz (Toronto, Canada) explores doctors, philosophers, and the Christian Fathers on menstrual blood. Susan K. Roll Buffalo, New York) surveys patristic and medieval texts dealing with the churching of women after childbirth. Grietje Dresen (The Netherlands) examines the churching of new mothers in the Roman Catholic tradition. Kristin De Troyer is Professor of Hebrew Bible at Claremont School of Theology and Professor of Religion at Claremont Graduate University. She is the author of The End of the Alpha-Text of Esther: Translation Techniques and Narrative Techniques in MT-LXX 8:1-17-AT 7, 14-4. Judith A. Herbert is a Ph.D. student at Claremont School of Theology. Judith Ann Johnson is an independent research scholar working with Claremont Graduate University's Women's Studies in Religion and University of Global Ministries. Anne-Marie Korte is lives in Utrecht, the Netherlands, and is the editor of Women and Miracle Stories: Multidisciplinary Explanation.
Visa hela texten

"The essays in this volume converge on a powerful and complex topic The authors write from a strong feminist perspective and underscore the negative valence given to women as a source of pollution in many of these traditions, while at the same time suggesting new readings of these traditional materials that link the blood of women to holiness." Donald Senior C.P., The Bible Today, July/August 2003.--Sanford Lakoff "To equate female blood, menstrual blood, with holiness? This is an audacious and long overdue academic undertaking. Read this book it's refreshing in its transdisciplinary vigor and forward-looking suggestions for reading canonical texts."--Sanford Lakoff "Wholly Woman Holy Blood is a dazzling collection. It is bound together by questions regarding blood taboos and women's relations to their religious communities. It is bound by its power to illumine the ordination of women and women's relations to childbirth and holiness. Engaging questions of purity, impurity, sacrality, and danger, the diverse authors exegete biblical texts, classical sources, and trajectories of Jewish and Christian interpretations of women and blood. The book in interdisciplinary in its scope, scholarly in its depth, integrative in its focus, and compelling in its fresh contribution." Mary Elizabeth Moore, Director, Women in Theology and Ministry, Professor of Religion and Education, Candler School of Theology, Emory University--Sanford Lakoff "Wholly Woman, Holy Blood presents saddening as well as infuriating details about the effects of texts like Lev.12 and 15 on the roles of women in Western society and religion. Biblical, theological, historical, and liturgical studies combine to an insightful and rich interdisciplinary conversation that exposes the perniciousness of past and present patriarchal disdain for womanly maters and women as a group. Thematic and text-focused, this volume illustrates that we gain much by reading biblical texts within their extensive history of interpretation." Susanne Scholz, Associate Professor of Religious Studies at Merrimack College, North Andover, MA--Sanford Lakoff " [T]his volume presents a thought-provoking, multidisciplinary mix of essays that alternate among textual, historical, and (Christian) theological analyses. [T]he volume raises important questions and deserves critical attention, especially from feminist theologians, but also from those who study gender in biblical literature and in church history." -The Catholic Biblical Quarterly, Vol. 66, 2004 The title of this book aptly describes the theme that binds this collection of essays together: blood- and the way in which blood signifies gender-based religious values .the essays complement one another nicely and form a coherent whole while leaving the reader to draw her or his own conclusions .the book as a whole makes a significant contribution to the complex issue of purity in Jewish and Christian tradition, a subject that has only recently received adequate attention. Pamela M. Eisenbaum, Journal of the American Academy of Religion (72/2), Summer 2004

Judith A. Herbert is a Ph.D. student at Claremont School of Theology. Judith Ann Johnson is an independent research scholar working with Claremont Graduate University s Women s Studies in Religion and University of Global Ministries. Anne-Marie Korte is lives in Utrecht, the Netherlands, and is the editor of Women and Miracle Stories: Multidisciplinary Explanation.

The semantics of taboo - menstrual prohibitions in the Hebrew Bible, Kathleen O'Grady; menstrual impurity and innovation in Leviticus, Deborah Ellens; blood - a threat to holiness or towards (another) holiness?, Kristin De Troyer; purity and impurity in Halakic sources and Qumran law; the woman in childbirth of John 16:21 - a feminist reading in (pro)creative boundary crossing - Kathleen P. Rushton; doctors, philosophers, and Christian fathers on menstrual blood, Jennifer Schultz; the old rite of the churching of women after childbirth, Susan K. Roll; the better blood - on sacrifice and the churching of new mothers in the Roman Catholic tradition, Grietje Dresen; female blood rituals - cultural-anthropological findings and feminist-theological reflections, Anne-Marie Korte; shedding blood - the sanctifying rite of heroes, Judith Ann Johnson.