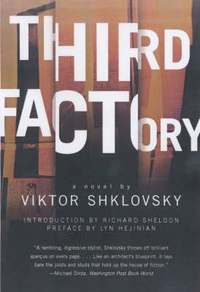 av Viktor Shklovsky
Häftad Engelska, 2002-10-01
139
Bevaka
Spara som favorit
Tillfälligt slut – klicka "Bevaka" för att få ett mejl så fort boken går att köpa igen.
Like many of Shklovsky's works, Third Factory is not easily classified. In part it is a memoir of the three "Factories" that influenced his development as a human being and as a writer, yet the events depicted within the book are fictionalised and conveyed with the poetic verve and playfulness of form that have made Shklovsky a major figure in twentieth-century world literature. In addition to its fictional and biographical elements, Third Factory includes anecdotes, rants, social satire, literary theory, and anything else that Shklovsky, with an artist's unerring confidence, chooses to include.
Visa hela texten

"A work of gossip, allusion and esoteric reference, with devices--some typographical--which Shklovsky borrowed from Sterne, whom he much admired."--John Bayley, Listener

Viktor Shklovsky (1893-1984) was a leading figure in the Russian Formalist movement of the 1920s and had a profound effect on twentieth-century Russian literature. Several of his books have been translated into English, including "Zoo, or Letters Not about Love, Third Factory, Theory of Prose, A Sentimental Journey, Energy of Delusion", and "Literature and Cinematography", and "Bowstring". Lyn Hejinian is a poet, essayist, and translator. Her groundbreaking book of poetry, MY LIFE, published by Sun & Moon/Green Integer, has had five reprintings from 1980-2002. Her most recent books include A BORDER COMEDY (Granary Books, 2001), SLOWLY and THE BEGINNER (both published by Tuumba Press, 2002), THE FATALIST (Omnidawn, 2003), SAGA/CIRCUS (Omnidawn, 2008), and THE BOOK OF A THOUSAND EYES (Omnidawn, 2012). The University of California Press published a collection of her essays entitled The Language of Inquiry in 2000. In the spring of 2007, she was elected a Chancellor of the Academy of American Poets. She teaches in the English Department at the University of California, Berkeley.