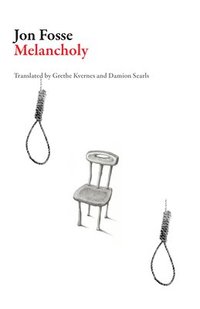 av Jon Fosse
Häftad Engelska, 2006-01-01
151
Köp
Spara som favorit
Skickas inom 5-8 vardagar.
Gratis frakt inom Sverige över 159 kr för privatpersoner.
Lars Hertervig is a provincial young Norwegian from a poor Quaker background, studying art in Germany and prone to crippling insecurities, sexual obsessions, and terrifying hallucinations. In prose as hypnotic as Beckett's or Bernhard's--but earthier, and funnier--the novel describes a single day of crisis and its repercussions, years later for Lars himself and a century later for a writer inspired by Hertervig's vision. Melancholy takes us deep inside a painter's fragile consciousness, vulnerable to everything but therefore uniquely able to see its beauty and its light.
Visa hela texten

"He has a surgeon's ability to use the scalpel and to cut into the most prosaic, everyday happenings, to tear loose fragments from life, to place them under the microscope and examine them minutely, in order to present them afterwards as a precipitous, West-Norway-colored, feverish dream of a Hieronymous Bosch nightmare, sometimes so endlessly desolate, dark, and fearful that Kafka himself would have been frightened." --Aftenposten "What he writes is so simple and so deep at the same time. He has a restlessness, a tension in his narrative style, and he writes about situations everyone feels involved in, no matter where in the world they are." -- Bergens Tidende * Bergens Tidende *

Jon Fosse was born in 1959 on the west coast of Norway and has written over thirty books and twenty-eight plays that have been translated into over 40 languages. His first novel, Red, Black, was published in 1983, and was followed by such works as Melancholia I & II,Aliss at the Fire, and Morning and Evening, which are available in translation from Dalkey Archive Press. He is one of the world's most produced living playwrights. In 2007, Fosse became a chevalier of the Ordre national du Merite of France, and he was awarded the International Ibsen Award in 2010. In 2011, he moved into Grotten, an honorary residence for artists on the grounds of the Royal Palace in Oslo. He was awarded the European Prize for Literature in 2014 and the Nordic Council Literature Prize in 2015. He currently has homes in Bergen, Oslo, and in Hainburg, Austria.