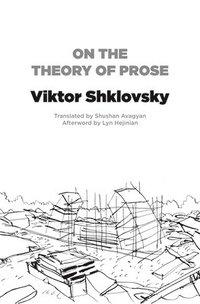 av Viktor Shklovsky
Häftad Engelska, 2022-01-20
219
Köp
Spara som favorit
As time has proven, Theory of Prose still remains one of the twentieth century's most significant works of literary theory. It not only anticipates structuralism and poststructuralism, but poses questions about the nature of fiction that are as provocative today as they were in the 1920s. Founded on the concept of "making strange," it lays bare the inner workings of fiction-especially the works of Cervantes, Tolstoy, Sterne, Dickens, Bely and Rozanov-and imparts a new way of seeing, of reading, and of interacting with the world.
Visa hela texten

"Out of Shklovsky's conviction came critical works of great beauty and complexity, but also several utterly remarkable literary works." -Martin Riker "Shklovsky's audacity gave him the freedom to take apart Cervantes and Sterne, Gogol and Tolstoy, with a brilliance that still dazzles ninety years later."-The Nation "Shklovsky, who refers to own his style as "serpentine," employs digression, repetition, autobiography and occasional salutations to the reader, confounding one's expectations of how a book of literary criticism should unfold. In doing so, he crafts a true rarity: a superbly written, extended critical study that's capable of inducing a feeling of affection in the reader towards its author."-The Guardian

A leading figure in the Russian Formalist movement of the 1920s, Viktor Shklovsky (1893-1984) had a profound effect on twentieth-century Russian literature. Several of his books have been translated into English, including , Theory of Prose, Knight's Move, and Hunt for Optimism, all available from Dalkey Archive Press.