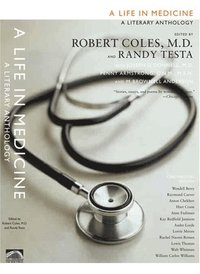 A Life in Medicine

av Robert Coles, Randy-Michael Testa, Joseph D'Donnell, Penny Armstrong, M Brownell Anderson
Häftad Engelska, 2003-09-01
209
Köp
Spara som favorit
Skickas inom 5-8 vardagar.
Fri frakt inom Sverige för privatpersoner.
Finns även som
Visa alla 1 format & utgåvor
"Excellent" poetry and prose about physicians and their patients, by Raymond Carver, Kay Redfield Jamison, Rachel Naomi Remen, and more (Library Journal). A Life in Medicine collects stories, poems, and essays by and for those in the healing profession, who are struggling to keep up with the science while staying true to the humanitarian goals at the heart of their work. Organized around the central themes of altruism, knowledge, skill, and duty, the book includes contributions from well-known authors, doctors, nurses, practitioners, and patients. Provocative and moving pieces address what it means to care for a life in a century of unprecedented scientific advances, examining issues of hope and healing from both ends of the stethoscope. "An anthology of lasting appeal to those interested in medicine, well-written literature, and a sympathetic understanding of human life." -Booklist
Visa hela texten

Take notes. In the end, you will suffer alone. But at the beginning you suffer with a whole lot of other people.

Robert Coles is a psychiatrist and writer. Until recently, he was the James Agee Professor of Social Ethics at Harvard University. He is a co-editor, with Randy Testa, of A Life in Medicine: A Literary Anthology and Growing Up Poor: A Literary Anthology; a co-editor, with Albert LaFarge, of Minding the Store: Great Writing About Business, from Tolstoy to Now; and the author of Lives We Carry with Us: Profiles of Moral Courage, edited by David D. Cooper, all published by The New Press. His many books also include The Moral Intelligence of Children and Bruce Springsteen's America: The People Listening, a Poet Singing. Coles received a Pulitzer Prize in 1973 for his acclaimed five-volume Children of Crisis series, a MacArthur Award in 1981, the Presidential Medal of Freedom in 1998, and the National Humanities Medal in 2001. He lives in Concord, Massachusetts. Randy Testa has taught literature and medical ethics at Harvard and Dartmouth Medical Schools. He is an editor at Doubletake magazine and lives in Cambridge, Massachusetts.