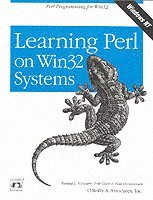 av Randal L Schwartz, Eric Olson, Tom Christiansen
Book Engelska, 1997-05-01
329
Köp
Spara som favorit
Skickas inom 5-8 vardagar.
Fri frakt inom Sverige för privatpersoner.
In this smooth, carefully paced course, leading Perl trainers and a Windows NT practitioner teach you to program in the language that promises to emerge as the scripting language of choice on NT. With a foreword by Larry Wall, the creator of Perl, this book is the "official" guide for both formal (classroom) and informal learning. Based on the "llama book," Learning Perl on Win32 Systems features tips for PC users and new NT-specific examples. Perl for Win32 is a language for easily manipulating text, files, user and group profiles, performance and event logs, and registry entries, and a distribution is available on the Windows NT Resource Kit. Peer-to-peer technical support is now available on the perl.win32.users mailing list. The contents include: An introduction to "the Perl way" for Windows users A quick tutorial stroll through Perl in one lesson Systematic, topic-by-topic coverage of Perl's broad capabilities Innumerable, brief code examples Programming exercises for each topic, with fully worked-out answers Access to NT system functions through Perl Database access with Perl CGI programming with Perl Erik Olson is director of advanced technologies for Axiom Technologies, LC, where he specializes in providing Win32 development solutions. Randal L. Schwartz and Tom Christiansen have also written Programming Perl, co-authored with Larry Wall and published by O'Reilly & Associates.
Visa hela texten

Randal L. Schwartz is an eclectic tradesman and entrepreneur, making his living through software design, technical writing and training, system administration, security consultation, and video production. He is known internationally for his prolific, humorous, and occasionally incorrect spatterings on Usenet -- especially his "Just another Perl hacker" signoffs in comp.lang.perl. Randal honed his many crafts through seven years of employment at Tektronix, ServioLogic, and Sequent. Since 1985, he has owned and operated Stonehenge Consulting Services in his home town of Portland, Oregon. Randal is not new to O'Reilly. He is author of Learning Perl and co-author of Programming Perl, which he wrote with Tom Christiansen and Larry Wall, the creator of Perl. Erik Olson is a renegade linguist who makes a living developing software for Win32 platforms. Since 1994, Erik has been director of advanced technologies for Axiom Technologies, LC, a software outsourcing shop. Erik delivers developer training, system administration, and program/concept development for a number of large-scale horizontal and vertical applications. Working as a program developer since 1986, Erik has implemented a variety of systems ranging from point-of-sales systems to horizontal PIM products to real-time financial market applications. Although much of his work is done in C++, he has particular interests in interpreted languages and ActiveX scripting. Erik earned a B.A. in linguistics from the University of Utah and pursued graduate studies in Arabic linguistics there and at the University of Washington. Tom Christiansen is a freelance consultant specializing in Perl training and writing. After working for several years for TSR Hobbies (of Dungeons and Dragons fame), he set off for college where he spent a year in Spain and five in America dabbling in music, linguistics, programming, and some half-dozen spoken languages. Tom finally escaped UW-Madison with B.A.s in Spanish and computer science and an M.S. in computer science. He then spent five years at Convex as a jack-of-all-trades working on everything from system administration to utility and kernel development, with customer support and training thrown in for good measure. Tom also served two terms on the USENIX Association Board of Directors. With over fifteen year's experience in UNIX system administration and programming, Tom presents seminars internationally. Living in the foothills above Boulder, Colorado, surrounded by mule deer, skunks, and the occasional mountain lion and black bear, Tom takes summers off for hiking, hacking, birding, music making, and gaming.