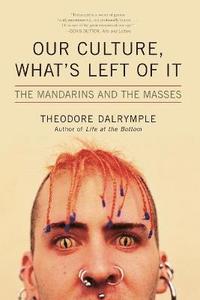 Our Culture, What's Left of It

The Mandarins and the Masses

av Theodore Dalrymple
(1 röst)  |  Läs 1 recension
Häftad Engelska, 2007-03-01
165
Köp
Spara som favorit
Kan levereras innan julafton!
This new collection of essays by the author of Life at the Bottom bears the unmistakable stamp of Theodore Dalrymple's bracingly clearsighted view of the human condition. It suggests comparison with the work of George Orwell. In these twenty-six pieces, Dr. Dalrymple ranges over literature and ideas, from Shakespeare to Marx, from the breakdown of Islam to the legalization of drugs. Informed by years of medical practice in a wide variety of settings, his acquaintance with the outer limits of human experience allows him to discover the universal in the local and the particular, and makes him impatient with the humbug and obscurantism that have too long marred our social and political life. As in Life at the Bottom, his essays are incisive yet undogmatic, beautifully composed and devoid of disfiguring jargon. Our Culture, What's Left of It is a book that restores our faith in the central importance of literature and criticism to our civilization.
Visa hela texten

Dalrymple writes a clear and considered prose that makes him formidable indeed. -- David Pryce-Jones * Book Review Digest * Theodore Dalrymple has succeeded (once more) in publishing a book that is both thoughtful and absorbing. -- Paul Hollander * New York Sun * The brutal, penetrating honesty of his thinking and the vividness of his prose make Theodore Dalrymple the George Orwell of our time. -- Denis Dutton, Editor * Arts and Letters Daily * His gift for storytelling will keep readers turning pages. * The Christian Century * Theodore Dalrymple is the best doctor-writer since William Carlos Williams. -- Peggy Noonan There is so much learning and unconventional wisdom in it that you want to make the reading last. -- Norman Stone Theodore Dalrymple is the Edmund Burke of our age.... Our Culture, What's Left of It is not simply an important book, it is a necessary one. -- Roger Kimball Dalrymple's moral courage shines through the most. Compelling reading; highly recommended. * Library Journal * Engrossing. Dalrymple is intelligent, witty, uncommonly perceptive about human affairs, and scathingly honest about human folly. -- Edward J. Sozanski * The Philadelphia Inquirer * It's rare for someone to produce a work on social issues that is so readable. -- Kevin Walker * Tampa Tribune * Insightful....[Dalrymple is a] profound British social critic. -- Thomas Sowell, Rose and Milton Friedman Senior Fellow on Public Policy at the Hoover Institution, Stanford University * Nationally Syndicated Columnist * Striking. Most collections of essays are lackluster affairs, but Dalrymple's is an exception. -- Jacob Heilbrunn * The New York Times * Penetrating analysis and literary eloquence make the book a worthy read for anyone concerned with the fate of civilization. -- Andrew Martin * Courier-Journal * The manner in which Dalrymple wields his critical scalpel fixes our attention...he makes no promise to fix our condition. -- Jay Martin * Antioch Review * It's rare to find such a morally coherent, historically informed and human account as Our Culture, What's Left of It. -- Rev. Johannes L. Jacobse * Town Hall * Whether you find Dalrymple refreshing or infuriating will depend on your political point of view. Dalrymple calls them as he sees them, and there is not an ounce of political correctness in him. -- Bruce Ramsey * The Seattle Times * Ridiculously prolific and a favorite of bloggers.... He's one of the very best social critics of our age. * Brothers Judd * The book is elegantly written, conscientiously argued, provocative and fiercely committed...measured polemics arouse disgust, shame and despair: they will shake many readers' views of their physical surroundings and cultural assumptions, and have an enriching power to improve the way that people think and act. -- Richard Davenport-Hines * Times Literary Supplement * Theodore Dalrymple makes a devastating diagnosis of liberalism's recent ills. -- Randy Boyagoda * Globe and Mail * Dalrymple has acquired a following on the sarcastic right; if anything, the thoughtful left should be reading him." -- Geoffrey Wheatcroft * Newstatesman.Com * Terrific.... Dalrymple is direct and his judgments are so true. -- Stanley Crouch * New York Daily News * An unexpectedly moving illustration. -- Stefan Beck * The New Criterion * [This book] depicts the crucial problems in western culture in beautifully rich prose. -- Gregory L. Schneider * Topeka Capital-Journal * Dalrymple is able to say things with an authority few have. -- Michael Platt * Society * The sobering, fiery and ominous truth. -- Stanley Crouch * Tulsa World * This highly intelligent and perceptive writer never hesitates to 'tell it like it is'. -- Angela Ellis-Jones * Salisbury Review * These bracing essays horrify, irritate, enlighten, amuse. They also stir you to remember, as Dalrymple puts it, what we have to lose. -- Roger Kimball * New York Sun * Read the words of a man who has been on the street...who brings a vast intelligenc

Theodore Dalrymple is a British doctor and writer who has worked on four continents and now practices in a British inner-city hospital and a prison. He has written a column for the London Spectator for thirteen years and is a contributing editor for City Journal in the United States. His earlier collection of essays, Life at the Bottom, was widely praised.