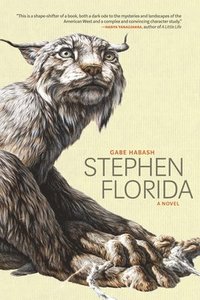 av Gabe Habash
Inbunden Engelska, 2017-06-22
318
Köp
Spara som favorit
Kan levereras innan julafton!
Finns även som
Visa alla 3 format & utgåvor
"In Stephen Florida, Gabe Habash has created a coming-of-age story with its own, often explosive, rhythm and velocity. Habash has a canny sense of how young men speak and behave, and in Stephen, he's created a singular character: funny, ambitious, affecting, but also deeply troubled, vulnerable, and compellingly strange. This is a shape-shifter of a book, both a dark ode to the mysteries and landscapes of the American West and a complex and convincing character study." --Hanya Yanagihara, author of A Little Life Foxcatcher meets The Art of Fielding, Stephen Florida follows a college wrestler in his senior season, when every practice, every match, is a step closer to greatness and a step further from sanity. Profane, manic, and tipping into the uncanny, it's a story of loneliness, obsession, and the drive to leave a mark. Gabe Habash is the fiction reviews editor for Publishers Weekly. He holds an MFA from New York University and lives in New York.
Visa hela texten

Foxcatcher meets The Art of Fielding, Stephen Florida follows a college wrestler in his senior season, when every practice, every match, is a step closer to greatness and a step further from sanity. Profane, manic, and tipping into the uncanny, it's a story of loneliness, obsession, and the drive to leave a mark. Finalist for the 2018 Young Lions Fiction Award "What a strange, strange, utterly intriguing novel... Writing like this takes guts." --Roxane Gay, author of Bad Feminist "Habash has created a fascinating protagonist in Stephen, a hard-driven athlete with a convincingly thoughtful mind..." --The New York Times Sunday Book Review "A striking, original, and coarsely poetic portrayal of a young man's athletic and emotional quest." --Publishers Weekly, boxed and starred review "[Habash's] writing is powerful and magnetic, with a quality that suggests it has been worked over to strip it bare of ornamentation but still leave it with a rare beauty that the greatest sportspeople, in a ring, on a court or on a pitch, can achieve." --The Guardian "Habash writes about the raw physicality of wrestling better than anybody this side of John Irving. . . . A lively, occasionally harrowing journey into obsession." --Kirkus "Stephen Florida's grim portrait of ambition led astray captures how competitiveness and masculinity can unravel those who blindly follow its codes." --The Atlantic "Habash has a great eye for the ways in which our public identities and private insecurities are shaped by happenstance. Stephen Florida is full of vim and invention, good jokes and built-up bodies, unexpected sentences." --Paris Review Daily "Stephen Florida is an obsession, but not just with wrestling -- he is the taut, erratic, boundless contradiction of what it means to be alive." --Los Angeles Review of Books "An early candidate for BEST COVER OF THE YEAR AND MAYBE ALL TIME, Gabe Habash's debut novel of love, obsession, and wrestling is yet another compelling reason to avoid college sports." --Literary Hub "In this novel, wrestling is really a pretext to introduce us to a powerful and engrossing new consciousness--Stephen's struggle is to come to grips with the grinding willfulness that both enables and hobbles everything he does. Plus, Habash's prose is dryly hilarious." --Publishers Weekly "Stephen Florida is brash and audacious; it's not just one of the best novels of the year, it's one of the best sports books to come along in quite a while. It's an accomplishment that's made all the more stunning by Habash's status as a debut novelist: It's his first time on the mat, and he puts on a clinic." --NPR "The prose is dizzyingly good." --Huffington Post "In this burningly, bitterly funny tale of college student Stephen, who throws himself into wrestling to face down his fears... Habash effectively relates the raw physicality of wrestling and the raw emotions of growing up." --Library Journal "For the person who wants sentences tight as rope, as tendons, as muscles, and just as sinuous." --Nylon "The reader comes to know [Stephen's] every interior thought, even through injury, manipulation and his ill-fated forays into emotions beyond the wrestling mat." --MPRNews "Habash describes his protagonist's bouts with brio and expertise. He also conveys the young man's single-minded obsession powerfully, even poetically." --Star Tribune "Stephen Florida is relentlessly inventive, utterly unyielding to expectation, and there's not a dull line in the thing." --Bookforum "I'm pinned to the mat by this one." --The Quivering Pen "[Stephen Florida] reads as a confessional -- like a diary that's had its lock ripped off of it and the pages written in blood." --Electric Literature "[Stephen is] fixated on his last chance to win the state championship, a

Gabe Habash: Gabe Habash is the fiction reviews editor for Publishers Weekly. He holds an MFA from New York University and lives in New York.