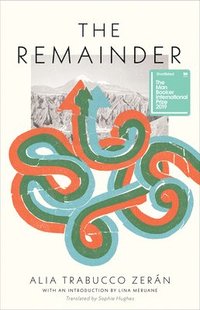 Shortlisted for the 2019 Man Booker International Prize Kirkus Best Fiction of 2019 Kirkus Best Fiction in Translation of 2019 "A lyrical evocation of Chile's lost generation, trying ever more desperately to escape their parents' political shadow." --Man Booker International Judges "This novel is vividly rooted in Chile, yet the quests at its heart--to witness and survive suffering, to put an intractable past to rest--are universally resonant." --Publisher's Weekly, *STARRED REVIEW* "A centrifugal story of death, history, and mathematics . . . a debut that leaves the reader wanting more." --Kirkus "You could call The Remainder a literary kaleidoscope: look at it one way and you see how the past lays a crippling hand on the generation that follows political catastrophe; shift the focus and you're plunged into a darkly comic road trip with a hungover trio in an empty hearse chasing a lost coffin across the Andes cordillera." --The Spectator "While writers such as Pedro Lemebel and Jose Donoso have explored the regime's impact on those who lived through it, Zeran is concerned with the next generation. Felipe, Iquela and Paloma are the children of ex-militants, attempting to "unremember" the past in Chile's haunted capital, Santiago." --TIME "The second-generation trauma narrative . . . gets a Chilean spin in Zeran's intense novel of interior monologues, which is Faulknerian in themes, structure, and style." --Vulture "A mesmerizing, roaming look at intergenerational trauma, told in a specific and surreal style that shimmers and shifts on the page and in the mind." --Nylon "Truly stunning, full of deft turns of phrase . . . shines especially bright when unwinding Felipe's melodic monologues." --Los Angeles Times "Deeply compelling." --The Guardian "A haunted novel, awash with sinister and elegiac moods. It stands as a testament to the way the past can unsettle us." --Star Tribune "Neither the characters nor the narrative ever deal directly with the historic events themselves, but rather with the fallout - the photographs, vocabulary, places and people left behind as remnants. Zeran seamlessly alternates between the voices of Iquela and Felipe, highlighting the opposing and gendered ways they have reacted to the circumstances of their childhood." --The Times Literary Supplement "Trabucco Zeran urges readers to value subtext just as much as the 'official' narrative . . . a smart, vivid, and richly layered story." --The Adroit Journal "Alia Trabucco Zeran's writing is gorgeous: she captures the courage, vulnerability, and suffering of her characters beautifully." --Book Riot "Intense and haunting, The Remainder is a startling reckoning with the history of violence." --Book Riot "This is a powerful debut." --Ms. Magazine "The Remainder controls a remarkable range of registers (it is, by turns, lyrical, elegiac, sensual, funny, tragic). The author, like her characters, is obsessed with words, those 'cracks in language' that house our particular ways of understanding things. This novel is sure to endure." --Edmundo Paz Soldan "A perfect companion book to last year's Empty Set, another sparse and brilliant Latin American novel with an experimental structure from the same publisher." --Chicago Tribune "Both a road trip and a countdown . . . fast-paced and gripping." --Librairie Drawn & Quarterly "A powerful, impressive novel, dotted with scenes that are as unique as they are unforgettable." --Lina Meruane "A fundamental book about what it means to mourn the past, about the remainders of a history that refuses to be forgotten. This is the debut we all wish we had written. A spirited, brave, urgent book, capable of weaving the political and the poetic." --Carlos Fonseca "The Remainder

Alia Trabucco Zeran was born in Chile in 1983. She holds an MFA in creative writing in Spanish from New York University and a PhD in Latin American Studies from University College London. La Resta (The Remainder) was chosen by El Pais as one of its top ten debuts of 2015 and was granted a Best Literary Work Award from the Chilean Council for the Arts. She is also the author of Las homicidas, a non-fiction book about women who kill. Sophie Hughes is an award-winning translator from Spanish. She has been the recipient of an American PEN/Heim Translation Fund grant, and in 2018 she was announced as one of the Arts Foundation 25th anniversary fellows for her contribution to the field of literary translation.