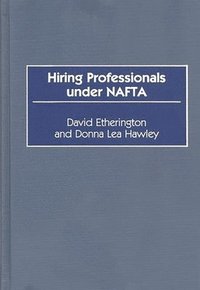 av David B Etherington, Donna Lea Hawley
Inbunden Engelska, 1998-05-01
999
Köp
Spara som favorit
Skickas inom 10-15 vardagar.
Fri frakt inom Sverige för privatpersoner.
Although much information is available about the trade provisions of NAFTA, little has been written on its provisions governing the international transfer of labor. For multinationals to remain competitive in the world market, they not only must access international markets for their products, but also the labor force to help them provide products. This book is a review of the immigration provisions of NAFTA and a step-by-step guide to help corporate management utilize them in their hiring practices. It also provides a reference source for legal material not easily found elsewhere, a description of the laws and the procedures they govern, a detailed description of how to complete INS forms, and checklists and suggestions to help do so. A unique guide for human resource executives and for their colleagues in the academic community interested in international business practices. Part I provides a brief overview of the standard immigration provisions that relate to all NAFTA visas. Part II discusses the legal requirements for business persons, treaty traders and investors, and intracompany transferees who enter the United States to conduct business. Part III describes in detail how the United States businesses can hire Canadian and Mexican professionals. Step-by-step descriptions note important differences in the procedures for professionals from Canada and Mexico. The authors describe what professionals qualify, how to complete INS form, obtain TN status for professional employees, apply for extensions, and change or end employment. One chapter is devoted to issues relating to the professional's family. Part IV discusses supplementary issues of the effect of strikes, employer legal obligations, and obtaining permanent residence. The Appendixes include the full text of chapter 16 of NAFTA, relevant laws, INS forms, and checklists and addresses that businesses will find useful for preparing and filing INS petitions.
Visa hela texten

DAVID B. ETHERINGTON, a shareholder in the Gainesville, Florida law firm of Etherington & Chambliss, P.A., has practiced immigration law since 1990 and is a member of the American Immigration Lawyers Association (AILA). Before relocating to Florida, he maintained a law office in the Republic of China, where he provided immigration counsel to Chinese multinational companies and served on the faculty of Tunghai University in Taichung. He is a frequent speaker and writer on immigration law matters. DONNA LEA HAWLEY is the author of a number of legal texts and articles in Canada and the United States. She has taught at Simon Fraser University and the University of Lethbridge. She earned her law degree in 1976 and a Masters degree in anthropology of law in 1985 from the University of Alberta. She is now with the law office of Etherington & Chambliss, P.A. in Gainesville, Florida.