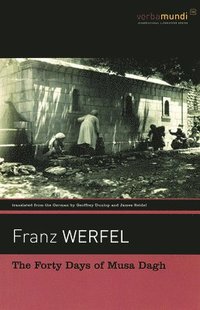 The Forty Days of Musa Dagh

av Franz Werfel
Häftad Engelska, 2012-01-31
259
Köp
Spara som favorit
Kan tyvärr inte längre levereras innan julafton.
Finns även som
Visa alla 1 format & utgåvor
"In every sense a true and thrilling novel."--New York Times Book Review The heroic story of resistance during the Armenian genocide. This is the story of how the people of several Armenian villages in the mountains chose not to obey the deportation order of the Turkish government. Instead, they fortified a plateau on the slopes of Musa Dagh and repelled Turkish soldiers and military police during the summer of 1915 while holding out hope that the warships of the Allies would save them. An international bestseller when first published in 1933, Franz Werfel's masterpiece brought the world's attention to this devastating crime against humanity and the Armenian people.
Visa hela texten

"The Forty Days of Musa Dagh will invade your senses and keep the blood pounding. Once read, it will never be forgotten."--The New York Times "A crackling read. Symphonic in its handling of profound themes, respectful of its most vacillating characters, Werfel's novel is a grand and satisfying story about the necessities and difficulties of leadership."--Booklist

Franz Werfel was one of Austria's most renowned writers at the end of the 1920s. In the 1930s, however, the humanist, anti-genocide stance he expressed in works such as The Forty Days of Musa Dagh, as well as his Jewish heritage, attracted the censure of the Nazis. His books were among the many that were burned amidst accusations of conspiracy and decadence. In 1940, Werfel fled to the United States via France and Spain and settled in Los Angeles.