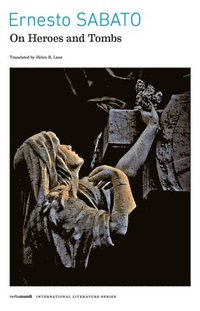 On Heroes and Tombs

av Ernesto Sabato
Häftad Engelska, 2017-08-10
239
Bevaka
Spara som favorit
Tillfälligt slut – klicka "Bevaka" för att få ett mejl så fort boken går att köpa igen.
Finns även som
Visa alla 2 format & utgåvor
The most important work of fiction by a major Latin America author. On Heroes and Tombs is woven around a violent crime: the scion of a prominent Argentinian family, Alejandra, shoots her father and burns herself alive over his corpse. The story shifts between perspectives to reveal the lives of those closest to her, telling of Martin, her troubled lover; Bruno, a writer who loved her mother; and Fernando, her father--who believes himself hunted by a secret, international organization of the blind. Exploring the tumult of Buenos Aires in the 1950s, characters are illuminated against burning churches and corporate greed. An examination of Argentinian history and culture, it reveals the country at every level, leading its reader into a world of passion, philosophy, and paranoia.
Visa hela texten

Praise for Ernesto Sabato and On Heroes and Tombs "An ambitious, tapestry-type fiction."--Kirkus "Offers by way of fair exchange a rich motherlode of imagery, language and haunting scenes."--Salman Rushdie "Dr. Sabato took his place among Latin America's greatest writers, and he followed a singular literary path that distinguished him from the writers of the Latin American 'boom' of the 1960s and 1970s."--Washington Post "In 1972, the Chilean poet Pablo Neruda listed Mr. Sabato among the Latin American writers who displayed 'greater vitality and imagination than anything since the great Russian novels' of the 19th century. On Heroes and Tombs, the story of a young man trying to find his way in life in Buenos Aires, is considered his most important work of fiction. But many people also know Mr. Sabato for his work in helping Argentina heal when democracy was restored in 1983 after seven years of military dictatorship."--New York Times

Ernesto Sabato was born in Buenos Aires in 1911 and died in 2011. He published three novels--The Tunnel, On Heroes and Tombs, and Abaddon el Exterminador, which won the French Prix du Meilleur Livre Etranger and the Jerusalem Prize--and many volumes of essays. In 1985, he won the Miguel de Cervantes Prize "for four decades of literary endeavor".