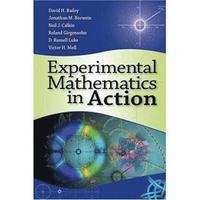 av David H Bailey, Jonathan Borwein, Neil Calkin, Russell Luke, Roland Girgensohn
Inbunden Engelska, 2007-05-01
1199
Köp
Spara som favorit
Skickas inom 10-15 vardagar.
Gratis frakt inom Sverige över 159 kr för privatpersoner.
Finns även som
Visa alla 1 format & utgåvor
With the continued advance of computing power and accessibility, the view that "real mathematicians don't compute" no longer has any traction for a newer generation of mathematicians. The goal in this book is to present a coherent variety of accessible examples of modern mathematics where intelligent computing plays a significant role and in so doing to highlight some of the key algorithms and to teach some of the key experimental approaches.
Visa hela texten

"... a very nice and useful book. ... a collection of demonstrations of serious applications of computing in mathematics, applications designed to illustrate the wide range of techniques and results that are playing a growing but still somewhat controversial role. ... covers a wide variety of topics ... a great resource ..." - Andrew Odlyzko in The American Mathematical Monthly, Vol. 118, No. 10, December 2011 Advance Praise "Computing is to mathematics as telescope is to astronomy: it might not explain things, but it certainly shows 'what's out there.' The authors are expert in the discovery of new mathematical 'planets,' and this book is a beautifully written expose of their values, their methods, their subject, and their enthusiasm about it. A must read." - Prof. Herbert S. Wilf, author of generatingfunctionology "From within the ideological blizzard of the young field of Experimental Mathematics comes this tremendous, clarifying book. The authors-all experts-convey this complex new subject in the best way possible; namely, by fine example. Let me put it this way: Discovering this book is akin to finding an emerald in a snowdrift." - Richard E. Crandall, Apple Distinguished Scientist, Apple, Inc. "Experimental mathematics has not only come of age but is quickly maturing, as this book shows so clearly. The authors display a vast range of mathematical understanding and connection while at the same time delineating various ways in which experimental mathematics is and can be undertaken, with startling effect." - Prof. John Mason, Open University and University of Oxford-June 2007 "Based on a short course taught by the authors, this book describes the shift in the way in which mathematics has been practiced over the past 20 years - a shift that has moved from theory to computation. ..." - Science News , July 2007 "Computers will change the face of mathematics...There certainly is a new generation rising using computers adroitly to expand the boundaries of pure mathematics." - David. P Roberts, MAA Online, September 2007 "David H. Bailey et al. have done a fantastic job to provide very comprehensive and fruitful examples and demonstrations on how experimental mathematics acts in a very broad area of both pure and applied mathematical research, in both academic and industry. Anyone who is interested in experimental mathematics should, without any doubt, read this book!" - Boda Kang, Gazette of the Australian Mathematical Society, November 2007 "The "action" in the title was only a few decades ago unthinkable to mathematicians. ... Focusing on experimental mathematics and its next-generation link to computing, this text gives the young (or the newly yougn) mathematician reasons to learn to use a keyboard." - SciTech Book News, September 2007 "The authors provide a coherent variety of accessible examples of modern mathematics subjects in which intelligent computing plays a signigicant role." - L'Enseignement Mathematique, July 2007 "The book is written by experts in experimental mathematics. It may be viewed as both an excellent textbook for beginners in the subject and a source book for experienced mathematicians. ... It is very lovely reading for those who look for challenging unsolved problems." - Wadim Zudilin, Zentralblatt MATH, April 2008 "One of the aims of the book is to defend an assertion that the statement 'the real mathematicians don't compute' is no longer valid with a new generation of mathematicians. ... The book is nicely written, with a special touch of mathematical poetry and beauty-behind-the-computation opinion. It will be appreciated not only by number theoreticians but also by anyone who does not prevent computers from entering the pure garden of mathematical delights." - European Mathematical Society Newsletter, September 2008