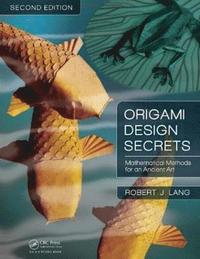 av Robert J Lang
Häftad Engelska, 2011-09-07
719
Köp
Spara som favorit
Skickas inom 5-8 vardagar.
Fri frakt inom Sverige för privatpersoner.
Finns även som
Visa alla 2 format & utgåvor
The magnum opus of one of the world's leading origami artists, the second edition of Origami Design Secrets reveals the underlying concepts of origami and how to create original origami designs. Containing step-by-step instructions for 26 models, this book is not just an origami cookbook or list of instructions-it introduces the fundamental building blocks of origami, building up to advanced methods such as the combination of uniaxial bases, the circle/river method, and tree theory. With corrections and improved illustrations, this new expanded edition also covers uniaxial box pleating, introduces the new design technique of hex pleating, and describes methods of generalizing polygon packing to arbitrary angles. With coverage spanning the foundations of origami construction and advanced methods using both paper and pencil and custom-built free software, Origami Design Secrets helps readers cultivate the intuition and skills necessary to develop their own designs. It takes them beyond merely following a recipe to crafting a work of art.
Visa hela texten

I am in complete agreement with the questions and thoughts expressed in his book. ... This book is perfect for math geeks who aim to apply their math in a very creative way. -OrigamiBlog.com, January 2012 Robert Lang made some substantial changes - much to the joy of many origami enthusiasts. The first edition impressed with 594 pages full of high-quality content going into techniques, mathematics, and folding instructions. The second edition tops that by an extra 176 pages, an extra 30% of content! ... Altogether, this wealth of new content definitely makes it worth buying the second edition - even if you already have the first edition. As to if you don't have either edition: I'd recommend going for the second one. -Sara Adams, HappyFolding.com, December 2011 The good news is that a second edition of Robert Lang's Origami Design Secrets is available. The bad news is you're going to want to buy it, even if you have the first edition. ... It's a tribute to both the author and the publisher (CRC Press) that such major updates have been allowed. This book is without doubt the best guide to creating origami that has ever been published and I suspect it will retain the crown forever. ... Quite simply, all creative folders should own this book if they have any interest in developing their skills. Even if they have no such interest, they should buy it - it's that good. -Nick Robinson, origami artist and author, on his blog, September 2011 Praise for the First Edition: The first part of his plan was to write the book he'd been contemplating while still at JDS Uniphase - Origami Design Secrets, which was published in 2003 and lays out the underlying principles of origami and design techniques. -Susan Orlean, The New Yorker, February 2007 When Robert J. Lang, a laser physicist, talks with passion about origami - the Japanese art of paper folding - the line between play and discovery also completely dissolves. Mr. Lang is what might be called an origamist (see www.langorigami.com). He wrote the book Origami Design Secrets: Mathematical Methods for an Ancient Art and has created tarantulas, delicate herons, 12-spined shells and big-horned elk out of single, uncut, folded sheets of paper. -Edward Rothstein, The New York Times, April 2006 This book is a synthesis of origami technique, history, and instructions, with very thoughtful and clear explanations for almost every aspect of the art of folding and designing origami. -Sarah Gourlie, Math Horizons, January 2006 Lang chose to strike a balance between a book that describes origami design algorithmically and one that appeals to the origami community ... . For mathematicians and origamists alike, Lang's expository approach introduces the reader to technical aspects of folding and the mathematical models with clarity and good humor ... Origami Design Secrets ... is highly recommended for mathematicians and students alike who want to view, explore, wrestle with open problems in, or even try their own hand at the complexity of origami model design. -Thomas C. Hull, The Mathematical Intelligencer, March 2005 This magisterial work, splendidly produced, covers all aspects of the art and science. -SIAM Book Review, November 2004 For most origami enthusiasts, the ancient Japanese art of folding and making creases is a mere hobby, and a grand pursuit for those giddily obsessed with the mathematics (or aesthetics) of how mere paper can be contorted into objects of beauty and interest. For Robert J. Lang, however, origami has become a life's pursuit ... -Chad Berndtson, The Patriot Ledger, November 2004 ... finally, the secrets of an origami master are revealed! It feels like Lang has taken you on as an apprentice as he teaches you his techniques, stepping you through examples of real origami designs and their development. -Erik Demaine, October 2003 There is something for everyone here, whether beginner or expert, left-brained or right, specialist or dilettan

Robert J. Lang has been an avid student of origami for over forty years and is now recognized as one of the world's leading masters of the art. He is noted for designs of great detail and realism, and his repertoire includes some of the most complex origami designs ever created. His work combines aspects of the Western school of mathematical origami design with the Eastern emphasis upon line and form to yield models that are at once distinctive, elegant, and challenging to fold. They have been shown in exhibitions in New York (Museum of Modern Art), Paris (Carrousel du Louvre), Salem (Peabody Essex Museum), San Diego (Mingei Museum of World Folk Art), and Kaga, Japan (Nippon Museum of Origami), among others. In 1992 Dr. Lang became the first Westerner ever invited to address the Nippon Origami Association's annual meeting; he has since been an invited guest at international origami conventions around the world. He lectures widely on origami and its connections to mathematics, science, and technology and teaches workshops on both artistic techniques and applications of folding in industrial design. Dr. Lang is one of the pioneers of the cross-disciplinary marriage of origami with mathematics; he has been one of the few Western columnists for Origami Tanteidan Magazine, the journal of the Japan Origami Academic Society, and has presented several refereed technical papers on origami-math at mathematical and computer science professional meetings. He has consulted on applications of origami to engineering problems ranging from air-bag design to expandable space telescopes. He is the author or co-author of twelve books and numerous articles on origami art and design. Dr. Lang was born in Ohio and raised in Atlanta, Georgia. Along the way to his current career as a full-time origami artist and consultant, he worked as a physicist, engineer, and R&D manager, during which time he authored or co-authored over 80 technical publications and 50 patents on semiconductor lasers, optics, and integrated optoelectronics. He is a Fellow of the Optical Society of America, a member of the IEEE Photonics Society, and served as Editor-in-Chief of the IEEE Journal of Quantum Electronics from 2007-2010. In 2009, he received the highest honor of Caltech, the Distinguished Alumni Award. Dr. Lang resides in Alamo, California.