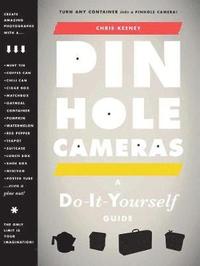 av Chris Keeney
Inbunden Engelska, 2011-06-17
169
Köp
Spara som favorit
Skickas inom 7-10 vardagar.
Gratis frakt inom Sverige över 159 kr för privatpersoner.
Did you ever think that the oatmeal container you open every morning when you make breakfast could be turned into a camera? Or that the mint tin sitting on your desk is capable of creating stunning images? In Pinhole Cameras, photographer and pinhole aficionado Chris Keeney shows you how to transform basic household containers-a shoebox, a coffee can, a matchbox-into amazing photographic devices.
Visa hela texten

Chris Keeney is a professional photographer living and working in San Diego, California. He was formally taught at the Rochester Institute of Technology in Rochester, New York, in analog film and paper photography. Even though he now uses digital photographic processes in his professional work, he enjoys the spontaneity and creative freedom of making his own DIY pinhole cameras. In the past five years Chris has made a name for himself in the pinhole photography world by inventing numerous DIY pinhole cameras and giving instructions on how to make those cameras online. He also has been publishing monthly features on pinhole photographers from around the world on his website since 2007. (http://www.chriskeeney. com/photography/pinhole/featured-photographers.html) With his knowledge of pinhole photography, Chris has become a known and respected expert on the art of DIY pinhole photography. Chris also enjoys using vintage cameras as well as toy cameras to create his images. His experimentation with these vintage and toy cameras has been published in books and on websites from around the world.