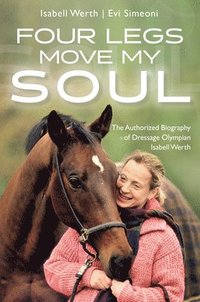 av Isabell Werth, Evi Simeoni
Häftad Engelska, 2019-10-22
259
Köp
Spara som favorit
Skickas inom 5-8 vardagar.
Fri frakt inom Sverige för privatpersoner.
German Olympian Isabell Werth is one of the most successful horsewomen in the world. With six Olympic gold medals and scores of championship titles to her name, there are few who equal her on paper. But an equestrian's success is wholly dependent on the relationship she has with her athletic partner-her horse-and Werth's astounding accomplishments would not have been possible without her unique approach to working with the animals she's loved since childhood. Even as a little girl, growing up on a farm on the Lower Rhine, it was clear that Werth possessed an extraordinary gift for empathizing with horses and foreseeing how they were likely to react in certain situations. This insight gave her a special ability as a rider and trainer. Here, Werth collaborates with accomplished sports journalist Evi Simeoni-someone who has witnessed and written about her career from the very beginning-to tell her life story. Readers will get the inside scoop when it comes to Werth's accomplishments-and her failures, too. They'll hear her personal thoughts regarding some of the biggest controversies to rock the dressage world: Rollkur and Totilas. Perhaps most importantly, they'll learn about each of the sensitive and talented horses that has impacted Werth's life, including Gigolo, Satchmo, and Bella Rose. For you see, there is a meme that is popular in the riding community that says, 'Two legs move our body, four legs move our soul'. And it is this sentiment that Werth feels perhaps best defines her.
Visa hela texten

Few have taken the dressage world by storm quite like Isabell Werth. This new authorised biography offers a fascinating insight into the life of the six-time Olympic gold medalist, who has remained at the top of the sport for three decades. The book contains detailed chapters dedicated to the key horses of Isabell's life and the topics and relationships that have shaped her career. It's a compelling read, with refreshingly honest commentary from Isabell, and is ideal for anyone with a love of dressage. -- PB * Horse & Hound *

Isabell Werth is a German equestrian and world champion dressage rider. She has competed in the Olympics five times (1992, 1996, 2000, 2008, 2016), winning ten medals, six of them gold. She holds the record for the most Olympic medals won by any equestrian athlete, and has earned dozens of European Championship, World Championship, and World Cup medals. Evi Simeoni has been the sports reporter at the Frankfurter Allgemeine Zeitung for more than 30 years and has been writing about the international equestrian scene and riding for just as long. She has received numerous prizes for journalism.