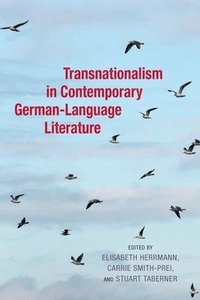 av Elisabeth Herrmann, C Smith-Prei, C Smith-Prei E Herrmann, E, Stuart Taberner
Inbunden Engelska, 2015-09-15
799
Köp
Spara som favorit
Transnationalism has become a key term in debates in the social sciences and humanities, reflecting concern with today's unprecedented flows of commodities, fashions, ideas, and people across national borders. Forced and unforced mobility, intensified cross-border economic activity due to globalization, and the rise of trans- and supranational organizations are just some of the ways in which we now live both within, across, and beyond national borders. Literature has always been a means of border crossing and transgression-whether by tracing physical movement, reflecting processes of cultural transfer, traveling through space and time, or mapping imaginary realms. It is alsobecoming more and more a "moving medium" that creates a transnational space by circulating around the world, both reflecting on the reality of transnationalism and participating in it. This volume refines our understanding of transnationalism both as a contemporary reality and as a concept and an analytical tool. Engaging with the work of such writers as Christian Kracht, Ilija Trojanow, Julya Rabinowich, Charlotte Roche, Helene Hegemann, Antje Ravic Strubel, Juli Zeh, Friedrich Durrenmatt, and Wolfgang Herrndorf, it builds on the excellent work that has been done in recent years on "minority" writers; German-language literature, globalization, and "world literature"; and gender and sexuality in relation to the "nation." Contributors: Hester Baer, Anke S. Biendarra, Claudia Breger, Katharina Gerstenberger, Elisabeth Herrmann, Christina Kraenzle, Maria Mayr, Tanja Nusser, Lars Richter, Carrie Smith-Prei, Faye Stewart, Stuart Taberner. Elisabeth Herrmann is Associate Professor of German at Stockholm University. Carrie Smith-Prei is Associate Professor of German at the University of Alberta. Stuart Taberner is Professor of Contemporary German Literature, Culture and Society at the University of Leeds and is a Research Associate in the Department of Afrikaans and Dutch; German and French at the University of the Free State, South Africa.
Visa hela texten

[D]elivers a timely contribution to the development of German literary studies . . . . [A] balanced and critical summation . . . . [A] versatile sourcebook for future embarkations into transnational literature. * MODERN LANGUAGE REVIEW *