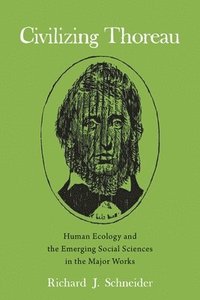 av Richard J Schneider
Inbunden Engelska, 2016-05-01
879
Köp
Spara som favorit
Skickas inom 7-10 vardagar.
Fri frakt inom Sverige för privatpersoner.
Recent book-length studies of Thoreau have focused either on his place in the history of the natural sciences or have applied political principles to his works. None, however, has fully addressed what ecocritic Rebecca Solnit calls "the Thoreau problem," the compartmentalizing of Thoreau's mind into either that of a hermit of nature or that of a champion of social reform. This book proposes an interdisciplinary solution to this problem through the connection between Thoreau's ecological study of nature and his intense interest in the emerging social sciences, especially the history of civilization and ethnology. The book first establishes Thoreau's "human ecology," the relation between the natural sciences and the social sciences in his thinking, exploring how his reading in contemporary books about the history of humanity and racial science shaped his thinking and connecting these emerging anthropological texts to his late nature writings. It then discusses these connections in his major works, including Walden and his "reform papers" such as "Civil Disobedience," the travel narrative A Week on the Concord and Merrimack Rivers, The Maine Woods, and Cape Cod. The concluding chapter focuses on Thoreau's attitude toward Manifest Destiny, arguing, against conventional views, that considering both his life and his writing, especially the essay "Walking," we must conclude that he both accepted and endorsed Manifest Destiny as an inevitable result of cultural succession. Richard J. Schneider is Professor Emeritus from Wartburg College. He has authored a monograph and many articles as well as edited three collections on Thoreau.
Visa hela texten

[Schneider's] new book once again shows him to be one of our foremost authorities on Thoreau. Thanks to Civilizing America, [what Rebecca Solnit has called] the "Thoreau problem"-the split between the nature lover and ecologist on the one hand and the social critic and activist on the other-may not disappear altogether, but it seems a lot less intractable. AMERIKASTUDIEN/AMERICAN STUDIES By exploring Henry David Thoreau's fascination with history, geography, and ethnology, this study hopes to resolve ... the tendency to consider Thoreau the nature lover as separate from Thoreau the social reformer. As Schneider reveals, Thoreau often connected the natural sciences with the social sciences. AMERICAN LITERATURE Schneider offers a way to solve the "Thoreau Problem," that is, the critical and general readers' tendency to compartmentalize Thoreau as either the rebel or the visual poet .... Manifest destiny and human ecology come together to contextualize Thoreau in an innovative manner that has illuminated decades of devoted scholarly life with Thoreau's work. THOREAU SOCIETY BULLETIN Although Schneider reminds readers that Thoreau's attitudes are complicated and ambivalent, he insists that readers recognize that Thoreau's writing repeats and explores, sometimes uncritically, many of 19th-century social science's ideas about race, progress, Manifest Destiny, and civilization . Recommended. CHOICE

Introduction Thoreau and the Emergence of the Social Sciences Thoreau, Ecological Succession, and Racial Science Civilizing Walden Becoming One of the Worthies of the World in Reform Papers Succession in A Week on the Concord and Merrimack Rivers "Presenting" the Past in The Maine Woods Nature and the Origins of American Civilization in Cape Cod Thoreau and Manifest Destiny Works Cited Index