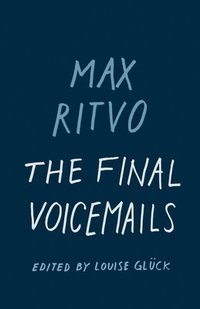 av Max Ritvo, Louise Gluck
Inbunden Engelska, 2018-10-04
209
Köp
Spara som favorit
Skickas inom 5-8 vardagar.
Fri frakt inom Sverige för privatpersoner.
Finns även som
Visa alla 1 format & utgåvor
"Even present tense has some of the grace of past tense, / what with all the present tense left to go." From Max Ritvo-selected and edited by Louise Gluck-comes a final collection of poems fully inscribed with the daring of his acrobatic mind and the force of his unrelenting spirit. Diagnosed with terminal cancer at sixteen, Ritvo spent the next decade of his life writing with frenetic energy, culminating in the publication of Four Reincarnations. As with his debut, The Final Voicemails brushes up against the pain, fear, and isolation that accompany a long illness, but with all the creative force of an artist in full command of his craft and the teeming affection of a human utterly in love with the world. The representation of the end of life resists simplicity here. It is physical decay, but it is also tedium. It is alchemy, "the breaking apart, / the replacement of who, when, how, and where, / with what." It is an antagonist-and it is a part of the self. Ritvo's poems ring with considered reflection on the enduring final question, while suggesting-in their vibrancy and their humor-that death is not merely an end. The Final Voicemails is an ecstatic, hopeful, painful-and completely breathtaking-second collection.
Visa hela texten

Praise for The Final Voicemails "Astonishing . . . These poems envision countless afterlives, each one more arresting than the last. . . . Ritvo's legacy, like Emily Dickinson's, will resemble not a solemn monument but a vibrant workshop, left open for readers to explore."-New Yorker "[The Final Voicemails] reflects Ritvo's astonishing linguistic agility, singular vision, and thought processes as well as his frankness, quirkiness, and sly humor. . . . It will stand as a testament to the salvation that is poetry, and how it lives beyond the page and the poet."-Booklist (starred review) "Stunning and heartbreaking . . . pressing and otherworldly . . . A collection that displays the breathtaking talent and effortlessly surprising shifts that marked [Ritvo's] first collection, Four Reincarnations. . . . These poems are raw and immediate, unflinching musings on the nature of the body, spirit, illness, and death."-Publishers Weekly (starred review) "In The Final Voicemails [Ritvo's] words engage with doubt and certainty in a manner that goes well beyond mere knowledge. They convey the sort of wild and strange imagery that so many contemporary poets strive to achieve. . . . These poems offer a surreal, in- and out-of-body candor that, at times, can be devastating to read. . . . [Ritvo] left us a legacy of wisdom in poetic reflections few have surpassed."-The Rumpus "An aesthetic and moral achievement. . . . Very few disciples of Ashbery have come so close to equaling the master's ability to coax a sense of mythic import out of personal life."-World Literature Today "Ritvo gives us poetry, so affirming, so beautiful, and so mortal."-Columbia Journal "In his second collection of poems, The Final Voicemails, the late Max Ritvo pulls back the curtains of the rooms that occupy his body and mind. . . . in these pages he still welcomes us into his home furnished with pain, loneliness, and joy all abound with his signature wry humor and transcendent hope."-The Arkansas International "The Final Voicemails is pressing, pressurized, and prescient beyond both its years and its words. These poems retell a life filled with pains and joys that are so intense they should almost be wordless, were they not performed here with Max Ritvo's immeasurable talent for articulating the piercing moments of life that so clearly demonstrate transcendence. Ritvo was a genius. He understood what poetry was meant to do in all its greatest moments and then pushed it to go just a little bit farther. Hundreds of years from now, we will still be talking about this book's unbearable truths, and its unbearable feats."-Dorothea Lasky "Since Max Ritvo's passing, I've heard critics compare him to Wallace Stevens, Rainer Maria Rilke, John Keats, and countless others. Of course, Max wasn't any of them exactly, but it's astonishing that one inscrutable young poet could evoke comparison with such titans while still remaining so enchantingly himself. In The Final Voicemails, we see Ritvo at his most imaginative-clouds are worn as wigs, meat is cut into a braid of arrows, a carpenter nails brains to the side of a lung. The effect is wild, incantatory. You'll find yourself beaming with your whole heart, even as Ritvo breaks it again and again."-Kaveh Akbar Praise for Four Reincarnations "Good-humored, appealingly sly, and surprisingly whimsical."-New York Times Book Review "This is an extraordinary body of work, the poems marked by intellectual bravado and verbal extravagance; Max Ritvo's dazzling suppleness of mind manifests itself in electric transitions and unexpected juxtapositions, in wide-ranging reference and baroque allusion. But what makes this book unforgettable is the core of intense emotion at the heart every poem. "Max has been dealt a bleak but fertile subject: the result is not, as one might expect of an artist so you

Max Ritvo (1990-2016) was the author of Four Reincarnations and the chapbook Aeons, chosen by Jean Valentine to receive the Poetry Society of America Chapbook Fellowship in 2014. Ritvo's poetry has appeared in the New Yorker, Poetry, and the Boston Review, and as a Poem-a-Day for Poets.org. His prose and interviews have appeared in publications such as Lit Hub, Huffington Post, and the Los Angeles Review of Books.